The digital team for Dental Products Report and Dental Lab Products was at the Venetian in Las Vegas, capturing all the news from Sirona's CEREC 27.5 event. This page featured regular updates from throughout the meeting, which allowed those of you at home to follow along with key highlights. If you're looking to engage on all things CAD/CAM and CEREC in particular, we invite you to start a conversation on Facebook or Tweet using the hashtag for the event: #C27aah.

Sirona Dental Systems last Thursday upped the ante in dental CAD/CAM, unveiling its latest advancement for the CEREC AC system, the CEREC Omnicam. The unveiling occurred at the company’s CEREC 27 & a Half event in Las Vegas, which was attended by more than 4,000 dentists who can only be described as raving fans of the technology.

The camera marks a significant advancement over the CEREC’s previous image capture devices, providing fast capture of full arches and opposing dentition in full-color 3D video that allows continuous capture of the oral cavity. The unit requires no powder and allows users to differentiate among different materials: natural tooth, soft tissue, amalgam, gold, etc. As the camera moves over the teeth, a photorealistic image is displayed in full color with crisp clarity that marks a major advancement over previous CEREC cameras.

“This camera just blows me away,” said Dr. Sameer Puri, CEREC instructor and cofounder of CERECdoctors.com.

“While you’re capturing your impression, you can also be pointing out other issues to the patient. If a picture says a thousand words, then video says a million words,” Puri said.

Dr. James Klim offers a demo of the CEREC Omnicam

Dr. James Klim, a CEREC instructor and beta tester who has used the unit for several months, said the camera indeed provides superior access to all areas of the oral cavity and provides a user experience that makes it much easier and less time consuming to achieve high quality captures. The camera’s ability to achieve excellent results without the use of powder also speeds the workflow in creating CAD/CAM restorations.

“If you can use an intraoral camera, then you can get excellent results with this system,” Klim said. “I really believe we’re witnessing history here. This is the type of technology that will create the future of dentistry.”

Dr. Klim was also a presenter at the event.

Sironal Dental Systems President Michael Augins said the camera has been in development for four years. He said Sirona’s goal is to continue improving on the chairside dental workflow, which the company pioneered in the 1980s.

“This camera marks a major step forward in convenience, quality and ease of use,” Augins said.

Sirona says owners of the CEREC Blue and Redcams are eligible for special upgrade deals.

What you need to know about the new CEREC Omnicam from Sirona New 3-D, streaming-video intraoral camera launched at CEREC 27.5. Manufactured by: Sirona Model: CEREC Omnicam 4.3 based on 1,089 reviews 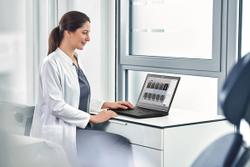