4 Artists Who Found Inspiration in Teeth

A look at for creative people who have found teeth to be a great jumping off point for their work.

The source of inspiration is a singular and mysterious thing. Throughout history, artists have found their muse in all manner of people, places, and things. The vision to create something new and expressive can truly come from anywhere, so it should be no surprise that many artists have found inspiration in the work of dentists.

Works from throughout history document the pulling of teeth and other dental practices, with such notable artists as Salvador Dalí, Norman Rockwell, Jean Dubuffet, and many others depicting operatory scenes in at least 1 work. However, sometimes the inspiration is more specific than just dentistry. Some artists have been inspired by teeth and all they might represent. Here are stories of 4 creators who were spurred on by dentition.

The influence of this American gothic horror pioneer’s work continues to be felt in creative spheres, and teeth show up at various moments in his work. However, it’s his early short story “Berenice” that really focuses in on a character’s dentition. This hazy, macabre tale is a first-person account from a man who obsesses over his cousin’s teeth as they remain white while her once vital body succumbs to an unnamed illness. The tale includes mention of dental instruments and the ending is a disturbing twist that caused some uproar when the story was published in 1835.

The connections between pop icon Lady Gaga and dentistry have always been both present and mysterious. She released a single named “Teeth” from her Fame Monster album and performed it during her The Monster Ball Tour, which included a stop headlining Lollapalooza 2010 with a stage featuring a neon sign promoting implants and sedation dentistry. A teeth-inspired bracelet—worn in her mouth like a grill—also made an appearance on the cover art for her 2013 single “Dope.” The connection might not be clear, but Lady Gaga seems to put teeth front and center in some of her work.

This art duo of Ukrainian native Mariana Fantich and Dominic Young, who hails from England, began collaborating in 2008. Their multimedia work centers on luxury and leisure items reimagined with the addition of teeth, bones, and hair. The duo gained some noticed around the internet with their 2010 project Apex Predator | Darwinian Voodoo, which featured a pair of dress shoes soled with denture teeth. Since then they have created numerous additional works that make prominent use of denture teeth on everything from dolls, to baseballs, to a gramophone. They also have several works consisting of arrangements of dental models. Among artists working today, Fantich & Young might be the toothiest. 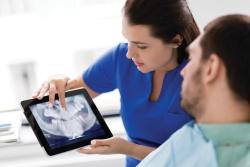