How to treat a vascular lesion using a ND:YAG laser

Using the PerioLase MVP-7 Free-Running Digitally Pulsed Nd:YAG Laser makes it simple and easy to remove these benign growths without leaving a scar.

Vascular lesions pose a complex challenge due to possible risk of excessive blood loss during surgical intervention and frequent recurrence of the lesion. Historically, hemangiomas were considered abnormalities to observe, but that were inherently benign and therefore without an immediate need for excision.

Particularly due to the nature of traditional surgical incision, which leaves a scar and has the potential for excessive bleeding, most clinicians were inclined to “watch and wait” until the hemangioma became a bigger problem that needed pressing attention.

However, patients are often frustrated or embarrassed by the unsightly nature of vascular lesions, particularly when they occur in or around the mouth and lips (venous lake hemangiomas). Cryosurgery, electrosurgery and sclerotherapy all emerged as alternative treatments that could address vascular lesions, but with varying results. Typical adverse effects include scars, pigmentation changes and tissue texture changes. Additional disadvantages of sclerotherapy include potential toxicity, allergic reaction and skin necrosis.

With the advancement of laser techniques in the past several decades, clinicians have felt more comfortable surgically treating vascular lesions in a minimally invasive nature. Specifically, the free running digitally pulsed Nd:YAG laser has been shown to be an effective tool to treat vascular lesions because it is moderately absorbed by hemoglobin but penetrates more deeply into the affected tissue. For deeper vascular lesions, lasers with deeper tissue penetration are necessary. A study from 2006 showed 94 percent of venous lake cases clearing up completely after a single treatment using the Nd:YAG.

While other lasers have been used to treat vascular lesions, scarring was more likely when compared to the Nd:YAG.8,9 Continuous-wave diode laser energy is only effective superficially and unsuitable for hemangiomas >3 cm. Carbon dioxide lasers have a surface effect on vascular lesions, leading to recurrence of the lesions and more frequent tissue changes, affecting both pigmentation and texture.

A female patient in her late 40s presented at the office with a large vascular lesion on the lateral border of her tongue (Fig. 1). The lesion had been present for more than 20 years, and the patient had never been offered a treatment option. The clinical situation was discussed with the patient, and treatment with the PerioLase MVP-7 was agreed upon. The patient was educated about the procedure.

Step 1. The patient was prepped with local aesthetic (4% Septocaine + 1/100k epi) with care taken to avoid blanching the lesion. Topical anesthetic such as tricaine blue can be used if the lesion is small.

Step 3. Treatment was performed in noncontact mode, with the laser about 1 to 2 mm away from the lesion, to allow the energy to be absorbed specifically by the stagnant blood of the lesion.

Step 4. Energy is delivered to the vascular lesion by gently moving the laser fiber tip back and forth over the benign growth until it was completely white. Care was taken to keep the laser tip 1 to 2 mm away from the tissue and to remain within the borders of the lesion so as not to damage unaffected tissue.

Step 5. After less than one minute, the procedure was completed (Fig. 2). Treatment duration, laser settings, and energy delivered were appropriately proportional to the size of the lesion. As the body clears out the debris and reabsorbs the tissue, the patient was advised that she would develop a sore in approximately two weeks (Fig. 3) with complete healing following two weeks after that.

Fig. 3: Two weeks after treatment, the patient exhibits a small sore on her tongue in place of the lesion. Fig. 4: One month after the procedure, there is no evidence the vascular lesion was ever present

Step 6. The patient presented four weeks post-op for a follow-up appointment. Upon examination, there was no indication of the hemangioma ever existing (Fig. 4).

See a demonstration of the laser treatment below:

With patients eager to remove these lesions for cosmetic reasons and clinicians wanting a modality that minimizes the amount of pain, clinical complications, and scarring involved, the Nd:YAG laser appears to be a superior choice for both patient and clinician satisfaction. 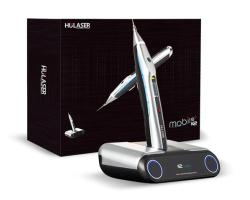