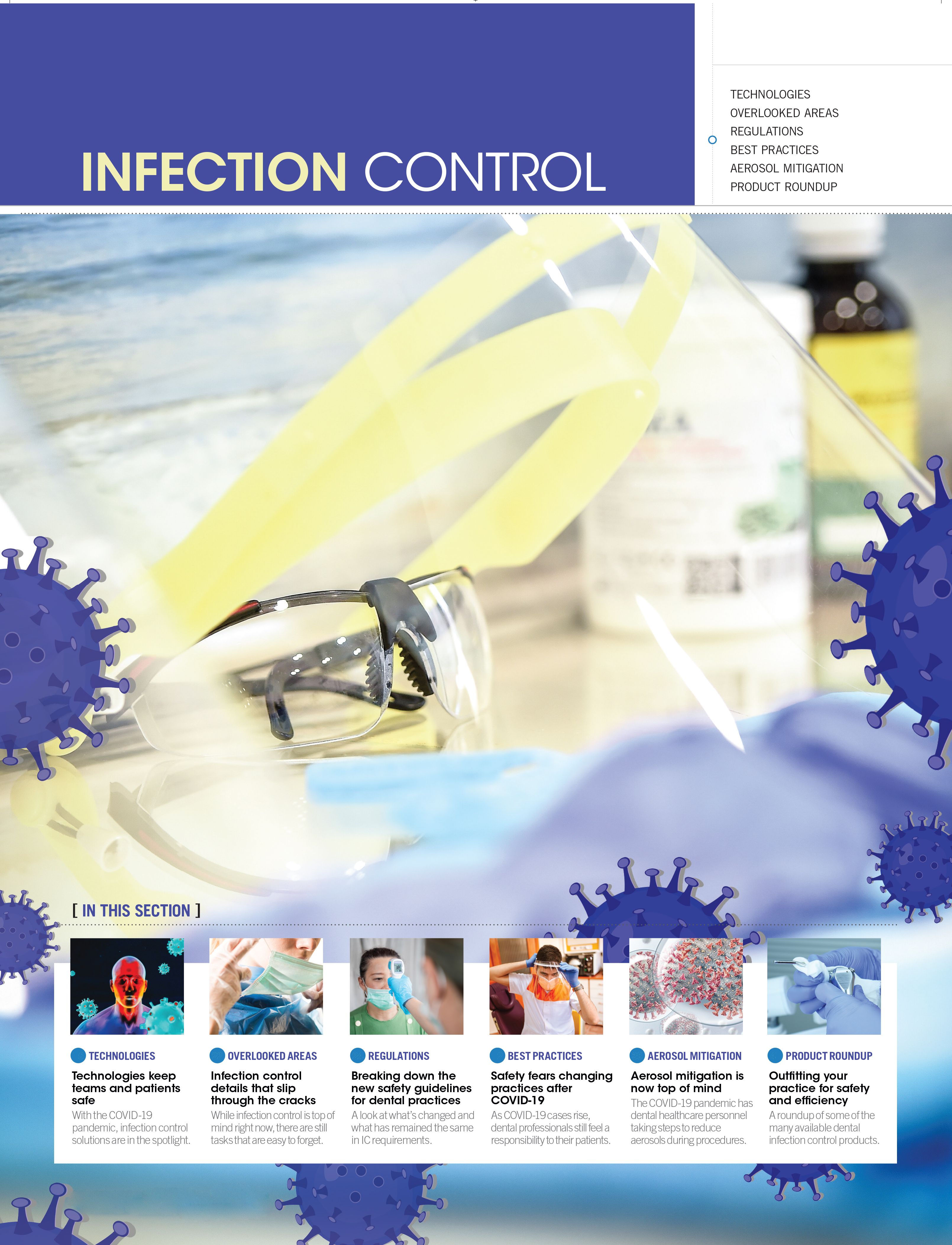 Aerosol mitigation is now top of mind. COVID-19 pandemic has dental healthcare personnel taking steps to reduce aerosols during procedures, as well as throughout the practice.

Aerosol mitigation is not a new concern for dental healthcare personnel (DHCP), but given the means by which COVID-19 is spread, it has received new scrutiny and new significance. Reducing aerosols seems to be on everyone’s mind lately, and effective management is a combination of the practice’s policies, technique and technologies.

Concerns
The good news is that whatever mechanisms were put into place at the outset of the COVID-19 crisis seemed to work: No one appears to have contracted the virus at a dental practice.

“On a CDC webinar presented on June 3, 2020, the CDC stated that at this time there have not been any confirmed cases of transmission of COVID-19 in dental settings reported to the CDC,” Mary Borg-Bartlett, President SafeLink Consulting, says. “Cases of dental personnel testing positive for COVID-19 have been reported to the CDC, but none of them have shown to be associated with work exposures.”

That doesn’t mean that everyone can relax. Especially as practices re-open and traffic starts to ramp up, DHCP must remain vigilant and observe proper respiratory hygiene protocols.

“What we’re hearing from our clients is it’s not ‘if’ they will have employees reporting to have COVID-19, but ‘when’,” Borg-Bartlett adds. “That means that the CDC guidelines for protecting employees and patients must be followed and enforced. It’s so easy for everyone to slack off after a while, and that could jeopardize the safety of dentists, staff and patients.”

Aerosol reduction is a key component in that fight.

“The CDC has been very clear on the concern for the safety of dental staff and patients during dental treatment that is aerosol-generating,” Borg-Bartlett observes. “Think of this treatment as similar to a cough or a sneeze. The airborne droplets are projected and suspended in the air for a length of time. I’ve seen information from reliable sources stating that COVID-19 can be suspended in the air for as long as two to three hours. The CDC recommends that the treatment room be left unattended for at least 15 minutes after patient dismissal to allow the droplets to settle on surfaces. The staff can then enter the room wearing PPE to clean the room. According to the presentation by CDC, droplets of 0.5 microns can remain suspended for as long as 41 hours with a 10 micron droplet suspended for 8.2 minutes. The procedures that the CDC has recognized as aerosol-generating are ultrasonic scalers, use of dental handpieces, use of air/water syringe, and air polishing and air abrasion devices.”

Aerosol reduction receives additional scrutiny because of COVID-19. However, proper respiratory hygiene was, of course, necessary even before the spring of 2020.

“It’s a new day. It’s only new because of the awareness,” Tom Smith, President and CEO of 3Flow, observes. “These types of pathogens have existed forever, and when dentists, orthodontists and so forth are working, there could be people that had the flu. There could have been people with various different ailments. There’s always been a high level of awareness towards the proper PPE and protective measures for dealing with pathogens in those spaces.”

“This is really where people started to understand the importance of the airflow and how to minimize the potential for exposure by three things,” Smith says. “You want to focus on dilution, capture, and then removal of those materials.”

Technologies
There are, of course, well-established systems and technologies for managing aerosols. For example, high-volume evacuation systems are prevalent, but they really weren’t developed with pathogen mitigation in mind.

“Many of the units that I’ve looked at were originally designed to remove mercury aerosols when amalgam fillings were being removed,” infection prevention consultant and speaker Jackie Dorst, RDH, BS, observes. “There are a lot of those units available in the dental profession, but we really don’t know how effective they’re going to be against pathogenic microorganisms, such as the SARS-CoV-2 virus, which is a very small particle size.”

Devices have been invented so that hygienists can more easily and independently use high volume evacuation (HVE). Zyris’ Isolite is one such adapter. The Isolite’s suction capabilities are designed to allow you to continuously evacuate saliva and debris, eliminating the problems that moisture and humidity can cause during procedures.

“A device that I’ve seen used in a few practices prior to COVID-19 is a mouthpiece that provides a light and also reduces aerosol,” Borg-Bartlett says. “Some of my clients who use this wouldn’t work without it and are now extremely pleased that they went to this extra expense as it helps protect them from these aerosols.”

“ReLeaf is a very soft, pliable adapter to the HVE,” Dorst adds in reference to the Ivory ReLeaf from Kulzer. “And one of the big advantages of ReLeaf is that it doesn’t require another person or another hand to hold that HVE. Traditionally, when the dentist is using high volume evacuation, the assistant is there holding the HVE for them. Well, hygienists create a lot aerosols with their ultrasonic scalers, air polishers and prophy jets. And yet they often don’t have an assistant available; they’re working solo. So having an HVE adapter that doesn’t require an assistant to hold the HVE is helpful-placing the HVE suction in the patient’s mouth and not requiring another person to hold-it is a big advantage.”

Extraoral aerosol suction units are more powerful ways to remove aerosols, but they come with their own set of caveats.

“With an extraoral aerosol evacuation system, I would want the office-before they invest in purchasing one-to look at: How many cubic feet of air does it move through the unit?  How is the collection device cleaned and sterilized or disinfected? What is the filtration system inside? How often does that filter need to be changed? And how much does that filter cost?” Dorst says.

They introduce another inconvenience-those units tend to be large and noisy.

“The difficulty of putting them in a small dental operatory is the size of them,” Dorst says. “Some are the size of a small shop vac, so they take up extra space and they’re noisy. You can’t move air without it being noisy. So, putting that extraoral suction in the operatory is going to be noisy, and for it to actually remove the aerosol, that has to be right next to the patient’s mouth, which creates an obstacle for the dental care provider. And when you look at these units, it looks like an elephant’s trunk coming over the patient.”

Those aerosols have to go somewhere, and that poses another concern.

“It’s not only just sucking up the aerosols, it’s the elimination once the air goes through the filtration unit,” Dorst says. “Where does it go? Does it come back out into the operatory? How much of it enters into the operatory? Does it remove it from the entire operatory, or should it be exhausted to the exterior?”

High Tech; Old School
Yet another option is to utilize lasers, in place of handpieces, to generate fewer aerosols.

Another school of thought involves isolating the oral cavity during work, further minimizing the amount of aerosols generated.

“One of the traditional methods for prevention of aerosols that has been emphasized by both the American Dental Association and the Centers for Disease Control is a rubber dam,” Dorst says. “Then, of course, that’s going to prevent any of the oral fluids in the patient’s mouth from coming out into the room and contributing to the aerosols. But there are so many procedures that we cannot use a rubber dam for, even with the hygienist, because the hygienist has to access all the teeth and, like with orthodontics or pediatric dental patients, it’s very difficult even to use a rubber dam.”

Management
While the epicenter for aerosol generation is the operatory, it is important to remember that exposure risks can come from anywhere in the practice, so technologies and systems must also address other areas.

“Because of the potential for an infected person to sit in a chair, you don’t know that that person might be infected,” Smith observes. “They may be pre-symptomatic; they may be asymptomatic. They may be symptomatic, but it’s not readily evident. So, now you have your emission source sitting right in the chair or, potentially, transporting from the front door all the way to the chair. And when you look at the wake of particulates that they are leaving or producing, that plume of particulate needs to be diluted, captured, and removed to mitigate the risk of exposure.”

Again, this has occurred for a long time before COVID-19, so what is new now?

“The new part is the awareness,” Smith says. “And it’s the focus on the current design and configuration of the air flow systems for those spaces. Traditionally, they have focused on temperature control and not on controlling or minimizing the potential concentrations of an airborne hazard. Now, in terms of protecting people in that environment, there are lots of tools and techniques.

“Ultimately you would redesign the air flow systems so that they would have a means to both dilute and remove the contaminants,” he continues. “And then, a local source capture is what we really want to rely on. How effective are we at capturing the materials right at the source?”

3Flow’s assessments has revealed where those risks typically occur and how they can be mitigated.

“We go in to evaluate facilities to determine what is the risk associated with exposure,” Smith says. “And then what type of safety measures are appropriate to help mitigate that risk? Oftentimes, when we’re talking about aerosolized components, it’s the ventilation systems that are the primary drivers of safety. And when you look at the industrial hygiene hierarchy of control, there are a series of measures that we would go through to determine how best to protect people working in a potentially hazardous environment.”

Those evaluations aren’t just helpful in the face of COVID-19. OSHA requires hazard assessment, as a routine practice. And it doesn’t have to be a facility-wide engineering feat that can help improve air-quality.

“OSHA requires employers to assess the hazards and then implement engineering and administrative controls, prior to requiring personal protective equipment,” Borg-Bartlett says. “Perhaps prior to implementation of these controls, a dental practice should consider the use of manual methods, rather than using equipment, such as an ultrasonic scaler. That would be an administrative control or change in the work practice. There are many engineering controls available that can help in minimizing the aerosol. It’s not uncommon now to see the use of a device that is placed in the area of the patient’s mouth to capture some of the aerosol during treatment. One that I saw being promoted recently was made a part of the hand mirror. I mentioned this to the hygienist who was performing my cleaning recently. She said it would be doable, but would require training and a change in the usual way the mirror is held. Training and how easy it is to adapt to a new method is something an employer must consider prior to making these changes and purchases. This hygienist also showed me a cup that looks like a snow cone cup that can be adapted to the high speed suction line. Most likely, another staff member or the patient would have to hold this one, but I think most patients would be willing to help in this way to protect the dentist and staff.”

Mitigating aerosol risk is a war that must be waged on several fronts, including processes, techniques, and technologies. 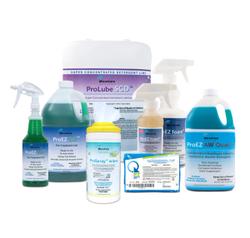 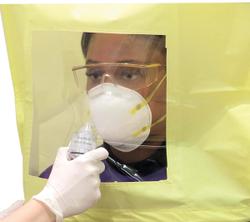 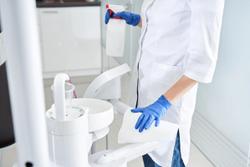