How to: Better place posterior composites

Ambient light in the dental office or operatory is one of the most common causes of direct restorative failure due to premature polymerization of composite resin materials.1,2 Premature polymerization has been directly related to an increased risk of staining, bacterial accumulation, marginal leakage and secondary caries.3 It also will prevent the clinician from bringing restorations to full contour, increasing the time in finishing and

Ambient light in the dental office or operatory is one of the most common causes of direct restorative failure due to premature polymerization of composite resin materials.1,2 Premature polymerization has been directly related to an increased risk of staining, bacterial accumulation, marginal leakage and secondary caries.3 It also will prevent the clinician from bringing restorations to full contour, increasing the time in finishing and polishing.4 Consequently, solutions have been limited to materials that slow the curing process.4

About the material
With a “Polymerization on Demand” system, Tetric EvoCeram eliminates the risk of premature polymerization using a special additive within the photo-initiator system.5 Although the material is less reactive to ambient light, the additive allows the composite to remain highly reactive to curing lights within a 400 nm–500 nm wavelength.5 Providing dentists with sufficient time to fully contour restorations efficiently and predictably, Tetric EvoCeram also offers greater ease-of-use and low polymerization shrinkage rates to reduce the risk of marginal leakage and secondary caries.5

Specially formulated with filler particles smaller than 550 nm to prevent reflection and scattering light, the material is easy to distinguish from surrounding dentition in radiographs.5 Additionally, similar to pure micro-filled and nano-filled materials, the size and shape of the fillers allow restorations to be polished to a high gloss in less than 30 seconds.5

Demonstrating excellent esthetics, the matched refractive indices of the monomers, fillers and nano-color pigments of Tetric EvoCeram produce a chameleon effect allowing restorations to naturally blend, even in the most challenging esthetic cases.5

Indicated for a broad range of uses in both the anterior and posterior, Tetric EvoCeram is available in 22 shades that may be dispensed from syringes or Cavifils to meet clinical and esthetic requirements of even the most challenging cases.5

Case presentation
A 24-year-old female patient arrived at the office for a new patient exam after having her last recall appointment 3 years prior and with little history of dental treatment. The patient first underwent full prophylaxis and radiographs were taken. Upon further examination with the dental explorer and mirror, it became apparent that pit and fissure caries were present in all molars. Because of their size and depth, the caries didn’t appear on the radiograph and the patient experienced no symptoms.

Initially, a diagnostic DIAGNOdent caries detector (KaVo Dental) that uses laser fluorescence to detect the presence of altered tooth substrates and bacteria, was used as an adjunct to treatment and to help the patient further understand her condition. With clinical examination and the DIAGNOdent, it became apparent that occlusal composite resin restorations were needed on tooth Nos. 2, 3, 14, 15, 18, 19, 30, and 31. Because the patient had only one prior filling placed in her life, she was apprehensive about undergoing treatment of this scale. Therefore, the clinician suggested a segmented treatment plan to restore each quadrant in separate appointments.

After gaining patient approval of treatment, the clinician determined from the results of the DIAGNOdent that it would be beneficial to begin treatment on the lower left quadrant, tooth Nos. 18 and 19, because they demonstrated the largest lesions (Fig. 1).

Prior to any restorative work, shade determination was completed by shaping a small amount of Tetric EvoCeram into a ball, which was then placed on one of the teeth and light cured. The composite was then examined and it became apparent that the patient’s dentition demonstrated high chroma and many color variations.

After determining proper composite shades that would be needed, the patient was anesthetized and rubber dam was placed with an 8a clamp to ensure proper isolation (Fig. 2). Using a No. 330 bur (SS White Burs Inc.) and an electric handpiece (KaVo Dental), tooth Nos. 18 and 19 were prepared for composite restoration. The electric handpiece was used to provide better control and torque, while the short length of the No. 330 bur allowed easy access to the shallow and narrow decay, without increasing the risk of over-preparation.

Once the preparation was complete, Total Etch 35% phosphoric etchant (Ivoclar Vivadent) was applied to the preparations and agitated for 15-30 seconds (Fig. 3). Etch was first placed on enamel then dentin and agitated (which causes etch to extend well beyond the margins). There is no detriment to enamel to be etched for a few seconds. You should etch beyond margins to blend composite into tooth structure with sable brush and other instruments. The preparations were then rinsed and lightly dried. Using the VivaPen (Ivoclar Vivadent) applicator, which can be rotated up to 270° to the proper position, the enamel and dentin of each preparation was then saturated with copious amounts of ExciTE F bonding agent (Ivoclar Vivadent) to ensure full coverage of the cavity walls (Fig. 4). The agent was agitated for 10 seconds. A thin stream of air was then used to remove excess material, as well as to create uniform and glossy surfaces. The bonding agent was then light cured for 10 seconds (Fig. 5) with a bluephase advanced LED curing light (Ivoclar Vivadent).

After curing, Tetric EvoFlow flowable nanohybrid composite (Ivoclar Vivadent) was placed directly in the preparations and manipulated with the dental explorer (Fig. 6). Providing the ability to direct the material into even the most difficult-to-reach areas, Tetric EvoFlow demonstrates great ease of  use, excellent surface affinity, while still holding its shape. Once applied to the preparations, the flowable composite material was light cured for 10 seconds.

To rebuild the anatomy of the dentin,Tetric EvoCeram universal nanohybrid composite resin in shade A3.5 dentin was then placed directly in the preparations and sculpted (Fig. 7) with a posterior occlusal gold composite instrument (Cosmedent). Using Tetric EvoCeram required no redirection of operatory lights because the material was unaffected by ambient light. Providing excellent working times, the dentinlayers of composite were efficiently and effectively brought to contour.

The dentin layers of composite were left uncured to allow application of stains to ensure the restorations appeared lifelike. Applied with the dental explorer, Tetric Color light brown and ochre stains (Ivoclar Vivadent) were mixed and slightly incorporated into the underlying dentin composite layers (Fig. 8). The material was light cured prior to placement of the enamel layer.

Immediately following stain application, Tetric EvoCeram in shade A2 enamel was placed in the preparations (Fig. 9) with the gold posterior occlusal instrument (Cosmedent). Used to replace and rebuild the primary and secondary anatomy of the teeth, grooves also were shaped into the material prior to curing to eliminate the need for excessive bulk-reduction with a bur. The restoration was brought to full contour and a sable hair brush was then used to blend and smooth the composite margins into the tooth structures and light cured for 10 seconds with the LED curing light. To seal the grooves and prevent impacted food particles during mastication, a very thin layer of Translucent shade Tetric EvoCeram was placed only on the grooves created on each restoration. This layer was then light cured for 10 seconds, rubber dam was removed and occlusion was then checked and adjusted as necessary with a carbide bur.

To polish the restorations, a series of OptraPol diamond impregnated silicone cups and points (Ivoclar Vivadent) were used. Applying pressure and a polishing point, the restorations were brought to high gloss and shine (Fig. 10).The OptraPol system proves very useful in polishing composite restorations, because the points and cups don’t flake and leave residue imbedded in the composite. Additionally, the points and cups remain firm and maintain their shape, which ensures full polishing of depressions and other irregularities in surface anatomy.

Upon completion of the case, the patient was very pleased with the function and esthetics of her composite restorations (Tetric EvoCeram) on tooth Nos. 18 and 19, which appeared indistinguishable from the surrounding dentition (Fig. 11). Following initial treatment, the patient was scheduled to continue treatment of the pit and fissure caries that remained in her other molars.

Conclusion
Enabling the dentist to control the polymerization process, Tetric EvoCeram provided viable and sound composite restorations in this case by allowing the dentist to bring the restorations to proper and full contour. Although clinically challenging to overcome, an alternative solution to the issue of premature polymerization is now available.1, 2, 4 Using Tetric EvoCeram, dentists have the ability to simply and effectively place direct composite restorations, to provide their patients with the best in function and esthetics. 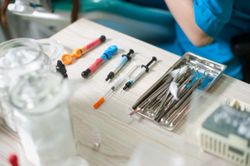 Braces Have Come a Long Way in the Cool Factor 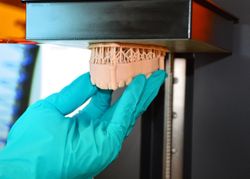 How to Incorporate 3D Printing into Restorative Workflows