The CAD/CAM Chorus: The most excited person on the planet

The most excited person on the planet

There are few people in the dental laboratory industry who have been as dedicated to promoting the potential of CAD/CAM as Lee Culp, CDT. Currently working as Chief Technology Officer for lab network Dental Technologies Inc., Culp’s resume reads like a who’s who of companies making cutting edge CAD/CAM technology.

While he’s been in on the ground floor of numerous developments in the field throughout the last two plus decades, Culp said he can still pinpoint the moment he knew this technology was ready for prime time and headed toward becoming a focus of the industry. It was his first glimpse of Sirona’s design software when it jumped from two to three dimensions.

“When I saw a tooth on a screen three dimensionally for the first time, I went here we go,” he said.

It might not have been a straight path since then, but the way Culp sees it, the progress of digital technologies in the dental industry has been a steady one, and one that is leading to more efficient production of better dentistry. For a while, digital design and robotic production were interesting novelties people wanted to put through the paces, but now Culp firmly believes the technology is ready for the industry to adopt in greater numbers and on a larger scale.

“Dentistry moves incredibly slow with all technologies and everything coming in. I just think we’re getting to the point where people are comfortable emotionally and intellectually with everything that’s happening,” he said. “I think we’ve had a good pace of adoption so far and I think that pace will speed up exponentially over the next 2 or 3 years. I don’t think we’re at the tipping point yet.”

That tipping point to digital dentistry and CAD/CAM production as the norm will actually come when clinicians fully embrace digital impression technology. The economics and trust in the chairside scanning technologies are still not there, and until labs start receiving a majority of their cases in digital files rather than physical impressions, the true potential of the technology to change the industry will not be completely put to use. But that doesn’t mean labs can’t lay the groundwork now so they’re ready to take off running when chairside scanning becomes the norm, because even the current CAD/CAM business models offer advantages to dental labs.

“We wont be fully engaged in a digital format until the dentists do it, but we don’t need to rely on the dentists to go into digital manufacturing,” Culp said. “On the laboratory end it’s economics.”

Of course moving to a digital workflow is not only about bringing in new technologies and processes. For labs to succeed they need to embrace the new tasks that come with relying on computers and complex milling machines. This means setting up information technology systems to receive large amounts of data and making system calibration part of the routine.

“If we don’t calibrate daily, then we lose 100 units,” he said, speaking about DTI where he is overseeing the implementation of a large-scale milling facility and plans to have all waxing done digitally by the end of the first quarter.

Even as CAD/CAM production becomes more prevalent, and the industry shifts to a robotic manufacturing platform, people will still be needed to guide the machines, digitally design restorations and assemble the various restoration parts being fabricated. Training and managing those people-both the skilled technicians making the transition, and fresh recruits just entering the industry-will be keys to success.

“Bringing in the tech, calibrating the machines, is the easy stuff. Now we have to take all this and present it to the people, and it’s fun, it’s exciting, if it’s presented the right way,” Culp said. “You need to know restorative dentistry, you need to know occlusion, you need to know materials. All you’re really doing is putting down the waxing instrument and picking up a mouse.

The knowledge base required to produce high-quality restorations may be the same, but Culp believes the digital workflows will be impossible for labs of all sizes to ignore. Working in virtual environments actually can help strengthen smaller labs if they embrace technological advantages that can make them more valuable to the dentists with whom they work and find reliable partners in larger labs that can provide access to new technologies and the efficiencies of large-scale manufacturing.

To solidify those partnerships they will need to find the CAD/CAM systems and business models that best fit their product lines and the desires of their dentists. Culp believes there is plenty of time for every lab willing to commit to the technology to carve out a place in the digital landscape. He’s excited to watch the transition he’s working on at DTI unfold, and looks forward to seeing the benefits CAD/CAM will bring to the entire industry.

“I’m the most excited person on the planet,” Culp said. “I’m the biggest advocate of growth.” 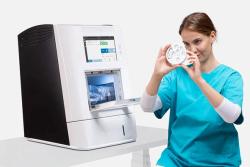