The Best of the Legacy Laboratories Web Series

Our popular Legacy Laboratories Web Series profiled family-owned businesses throughout the year, capturing the histories of some of the most unique labs around. Here is a chance for you to revisit some of the featured labs that captured your attention in 2012.

Our popular Legacy Laboratories Web Series profiled family-owned businesses throughout the year, capturing the histories of some of the most unique labs around. Here is a chance for you to revisit some of the featured labs that captured your attention in 2012.

A commitment to providing quality esthetic dentistry and staying ahead of new technology-along with a shared middle name-have been passed down from one generation to the next at Sikes Dental Studios in Charlotte, N.C.

Four generations have been or are currently employed at the company that was founded by Adam Lee Sikes, who got his start in the industry when he worked for a few dental labs before launching his own business in 1944.

Adam was joined by his son, Raymond Lee Sikes, who purchased the lab in the late 1960s. Raymond’s son, Lindy, whose middle name is Lee, came into the business in the 1970s, and he continues to own and operate it. He works with his son, Shelton Lee.

“In the early days it was a small operation,” Lindy said. “They (Adam and Raymond) worked side-by-side. It was a 3- to 4-person operation.”

Lindy decided he was not headed toward a career in the dental lab industry. Instead, he worked in sales and service in the boating industry. He returned to the lab business in the mid-1970s and, much to his surprise, discovered it was in his blood.

“When I got back into it, it was like falling in love,” he said. “Because I knew where I wanted to set my direction.”

He purchased the company in the late 1970s and has worked to continue the reputation for quality esthetics started by his father and grandfather. The studio takes pride in working with some of the country’s premier cosmetic dentists.

Sikes Dental Studios also strives to be at the forefront of new technology. The studio is a Beta center for Sirona. When the CEREC AC Bluecam was developed, Sikes Dental Studios had a chairside unit in the laboratory months prior to its introduction.

“This industry is made up of phenomenal people,” he said. “They all have this love for a craft. And you won’t find a more caring group.”

He said being involved in industry associations enables the exchange of information and helps lab operators prepare for important changes, such as digital technology, that are coming and which he expects to change the way labs operate. Digital technology will enable labs to serve dentists even quicker, and possibly expand their client bases.

“With the new digital technology we’re already working with doctors in 12 states and Canada,” Lindy Sikes said. “We can receive a file digitally and turn a case around in three to four days.”
He sees digital as having the potential to revolutionize the industry.

“In my career, the two most dramatic changes were the pressable ceramics that made better esthetics possible, and that was 30 years ago,” he said. “The second biggest thing is going to be the digital revolution.”

As thrilling as the future is, his son, Shelton, said he appreciates the older ways of doing things. Both Shelton and Lindy are CDTs.

“This industry is rapidly changing,” Shelton Sikes said. “But it’s not all mechanized. It still involves techniques that my grandfather used.”

Techniques used by generations before appeal to him because he enjoys working with his hands.

“You still have to have the talent and the touch because everybody’s smile is different.”

Read more profiles on the next page...

Amos Harting, president of Harting Dental Arts Lab Inc. in St. Louis, bears more than just his father’s name. Like his predecessor, having artistic aptitude and mechanical skill have helped him thrive in the business.

His father, also named Amos Harting, was fresh out of the armed services in the late 1940s when he was tapped to become a dental technician by his uncle, Weldon Niesling, who was a dentist who also operated a small dental lab.

“My dad got out of the Navy and my uncle knew my dad was good with his hands and a good artist,” Harting said. “That’s a paradox. It’s rare to have those skills together.”

While today there are thousands of dental labs throughout the U.S., they were not as common in post-war America. It was not unusual for a dentist to fill the void by operating their own small labs.

“There weren’t a lot of labs at that point,” Amos Harting Jr. said “A lot of dentists did their own gold work.”

The elder Amos Harting worked for his uncle for about 10 years before launching his own lab in 1957 where he focused on waxing, casting and gold crowns. “That’s what they did back in the 1950s,” said Harting who joined the company in 1977.

Being able to use those same skills-artistic ability and technical aptitude-are part of what Harting enjoys about the business. It’s also crucial to the success of any lab.

“The big part in matching teeth is in the dental technician’s skill, and in the materials and the knowledge of materials,” he said.

Harting wasn’t planning on entering the business after college where he studied criminal justice. But his father asked him if he wanted to come aboard and he decided it would be a good move. He went on to get an associate’s degree in dental technology.

As company president, Harting has overseen the growth of the 10-person lab into new areas of expertise such as partials, dentures and hybrids. He estimates that about 75 percent of the business is generated from crowns and bridges and 25 percent is from removables.

Hybrids are popular among people who want to replace their dentures and seek a better fit.

“They’re more like natural teeth,” he said. “They don’t flop around in their mouths. Dentists like them because they’re removable and more repairable.”

Focusing on hybrids “has made our business more diverse,” he said. “It also gives the dentist more options.”

He said his company gets calls from other dental labs to handle tough cases such as central incisors, which are difficult to match.

“It’s the hardest tooth in the mouth to do,” he said. “You can clearly see if the shade and shape don’t match. They (other labs) don’t want to do it because they can’t do it right and they have to do it over and over again.”

As proof of its expertise Harting Dental Arts Lab provides continuing education classes for dentists.
“We bring dentists in for educational seminars,” he said. “It adds value to our lab.”

Harting also has worked with Vident, Nobel Biocare and other companies for many years teaching seminars on such topics as esthetics, removable restorations and porcelain building to other technicians throughout the country.

“The best part of teaching is that I have friends from all around the country because of it,” he said.

A third generation in the family also has gotten into the business. Harting’s sons Blake and Barret handle porcelain where, once again, those seemingly opposing talents of artistic and mechanical skills come into play.

Blake said he likes the job because “it’s open to your creative interpretation. You can really make something amazing and pretty. It’s fun to work with a paint brush and in the sculpting and building process.”

Barret enjoys spending time on the bench with family.

“It’s fun to work with family,” he said. “You can have a level of comfort that you don’t get with a boss you don’t know. You can talk about anything.”

Harting said, getting to work alongside his sons “is just one more bonus of his job. I love going to work on Monday because I love my job.”

Bill McCormick, CDT, owner and manager of Heritage Dental Laboratory, was on a path that would have taken him to law school when he happened to see a dental lab project that his brother-in-law, who was attending dental school, was working on. Seeing that project entirely changed his career path.

“I decided I’d rather work with my hands and be creative,” said McCormick, who launched his career by attending a dental tech program offered then through the Illinois Dental Laboratory Association. It was the 1960s and the federal government was helping fund educational programs to fill a need for dental lab technicians.

After completing the program, McCormick did a stint in the U.S. Army where he was made a non-commissioned officer and taught dental technology to other military personnel. The connections he made were helpful when he started his own lab, now located in Arlington Heights, Ill., in 1972. Former army officers who became dentists in private practice sent their lab work to him.

Today, Heritage has grown to have a staff of 18. McCormick said his lab has thrived by putting an emphasis on providing quality products and services, superior esthetics, continuing education and good business practices.

“The dental laboratory industry has matured,” he said. “But we’ve faced numerous challenges along the way like outsourcing, adapting CAD/CAM, the economy, and the diminishing coverage provided by dental insurance.”

The lab serves customers from throughout the U.S. and from such countries as Australia, Guam and Puerto Rico. Because of a relationship that McCormick has with a dentist in California, the company frequently does work for celebrities.

“A lot of notable people in the entertainment and media fields have our crowns in their mouths because we turn out a reliable product and provide the ultimate in esthetics and personal communication,” he said.

Though celebrities’ smiles are improved by the lab’s work, McCormick said technicians rarely, if ever, get acknowledged for their work.

Though McCormick got into the industry because he liked the creative aspect of it, he also enjoys the business side. Through years of practice and CE, he has acquired the expertise to partner with dentists and help guide them in their work.

“I love being a teacher to the dentists to show them how to take impressions and deliver restorations,” he said.

Building the lab’s business is an on-going task that McCormick also enjoys. He said the book “Stop Selling, Start Partnering: The New Thinking About Finding and Keeping Customers,” by Larry Wilson helped him realize that building relationships is a more effective way to build a business. He has a strong relationship with the practice management firm, Blatchford Solutions. “The practice manager will say to a dentist, ‘Hey. Work with Heritage. They’ll make you look good with your patients and create superior cosmetic restorations.’”

That endorsement leads to new clients and to repeat business.

McCormick’s family is greatly involved in the dental industry including some of his children, nieces, nephews and brother-in-laws who are dentists, dental specialists, hygienists and lab owners.

Though it’s easy to imagine dental talk filling Thanksgiving dinners, he said they try to put a limit on that. He also has no regrets that he didn’t go to law school. Heading a dental lab turned out to be the better career for him and brings a feeling of satisfaction when he sees his work. 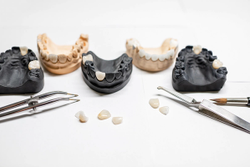 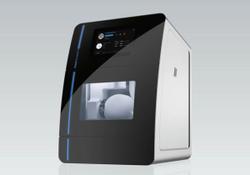