What we can learn from lizards

December 14, 2010  | dentalproductsreport.com In an evolutionary sense, humans have little in common with the tuatara. The ancient lizard species, native to New Zealand, is the last in a genetic line that flourished some 200 million years ago. It features a number of properties that are rare or found nowhere else in nature today and thus is a prized specimen for evolutionary biologists to study.

In an evolutionary sense, humans have little in common with the tuatara.

The ancient lizard species, native to New Zealand, is the last in a genetic line that flourished some 200 million years ago. It features a number of properties that are rare or found nowhere else in nature today and thus is a prized specimen for evolutionary biologists to study.

Among those features is the way tuatara teeth are fused directly to their jaws. The lizards lack the periodontal nerve that helps many other species gauge bite forces during chewing, and a recent study published in the Journal of Biomechanics shed some light on how tuataras use the muscle groups that control their jaw movements to manage bite forces and prevent damage to the jaws during mastication.

While the study was designed to examine how the lizards are able to maintain optimal jaw function throughout their more than 60-year lifespan, the results might also provide a good starting point for people looking to study how humans with dental implants adapt to their new teeth.

“The finding that the jaw joints could be important in maintaining some degree of normal feeding function when the teeth are lost could lead to future studies,” said Dr. Neil Curtis, a postdoctoral fellow at the University of Hull in England. “For example how well humans with replaced teeth control bite forces, or how the muscle activities vary between those with normal teeth and those without.”

Because dental implants are attached directly to the bone with no periodontal ligament to provide a cushion, implant crowns, bridges and implant-retained dentures are likely to behave much more like a tuatara’s teeth than the teeth they are replacing. Thus, humans with implants wind up with something in common with ancient lizards.

Dr. Curtis said his study’s results do not provide any viable information that can be translated to humans, but the computer modeling techniques he and his fellow researchers used in their study of tuatara skulls could be adapted to study how human jaws function and control bite forces when it comes to dental implants.

“This means analyses into the function of the human masticatory system can certainly be carried out,” he said.

In Dr. Curtis’ study the tuatara skulls were scanned using computed tomography to create 3D virtual models. These models were imported into a software application designed for performing multi-body dynamic analysis for bite force simulations. The software allowed the creation of virtual muscle strands connecting the jaw and the skull and allowing the moving pieces to interact, with accurate measurements of the forces affecting the muscles, bones and joints during chewing of materials with different densities.

The study determined that tuataras are able to manage the bite forces and prevent damage to their jaws while biting hard substances by various muscle groups on opposite sides of the jaw working in conjunction. Dr. Curtis said he believes humans with implants would be able to manage bite forces in a similar manner.

“All animals have groups of muscles that open the jaw and groups that close the jaw,” he said. “While the positions and some characteristics of these groups will differ, their ultimate function will be similar. I therefore believe that muscles of mammals could function in the same way as the tuatara.”

Of course translating his research data directly to human jaws is not possible. However, similar research on humans with dental implants might be beneficial to understanding how humans adapt their jaw function when implants are placed, how to best care for implants after they are placed and possibly even how to improve implant design for optimal jaw function.

“We have only modeled the situation virtually, but in vivo, the effect of modification to normal jaw function could have a major long-term effect,” Dr. Curtis said. “If we know more, such as forces in the jaw joints are too high when the teeth are lost, then perhaps better post-implantation advice could be given. For example eating certain foods that will not cause high bite/joint forces, or perhaps more sophisticated implants that damped peak bite forces somehow to help protect the teeth and jaw joints against these sudden high forces.”

The current research may not offer applicable information, but looking at the ancient teeth of the tuatara may help humans take a bite out of understanding how humans with dental implants manage biting. 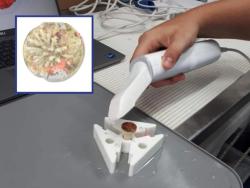