Community water fluoridation has been around for 70 years, but not much research has been conducted over the last several decades. A new study provides contemporary evidence on the topic.

Community water fluoridation was a major breakthrough for national oral health when it was first introduced in 1945 in Grand Rapids, Michigan. In fact, the Centers for Disease Control and Prevention deemed it one of the 10 great public health achievements of the 20th century.

Although many studies have been conducted highlighting the benefits of fluoride in water over the last 70 years, including preventing tooth decay, there isn’t that much recent research on the topic. That’s why researchers affiliated with the University of North Carolina at Chapel Hill School of Dentistry set out to analyze the correlation between the availability of community water fluoridation and dental caries experience in U.S. child and adolescent populations.

The cross-sectional study took county-level estimates of the percentage of the population served by community water fluoridation from the CDC’s Water Fluoridation Reporting System and merged it with dental examination data from 10 years of National Health and Nutrition Examination Surveys. According to the study, dental caries experience in the primary dentition was calculated for 7,000 children ages 2 to 8 as well as in the permanent dentition, along with filled tooth surfaces for 12,604 children and adolescents ages 6 to 17.

Trending article: The states with the best and worst oral health in 2018

The researchers discovered that counties in which more than 75 percent of the population had access to community water fluoridation saw a 30 percent reduction in dental caries experience in the primary dentition and a 12 percent reduction in the permanent dentition compared to counties in which less than 75 percent had access to community water fluoridation.

Dr. Howard Pollick, an ADA spokesperson and the director of the dental public health residency program, department of preventive and restorative dental sciences at the School of Dentistry, University of California San Francisco, says this study provides more contemporary evidence of the continued benefit of water fluoridation in the United States.

“Tooth decay continues to be a problem for a small portion of the population,” Dr. Pollick says. “Typically the poor suffer more than the more affluent in terms of tooth decay, and that’s probably related to diet, eating sugar frequently, as well as maybe not using fluoride toothpaste on a regular basis. Just by virtue of where you live, because there’s fluoride in the water or not, will determine the risk you have for getting cavities.”

We’re currently living in an era in which most people are using fluoride toothpaste on a daily basis, so is fluoride in the water even still necessary? Dr. Pollick says yes.

“This study demonstrates that. Having fluoride in the water as well as fluoride toothpaste, you’re getting the maximum benefits in terms of a reduced chance of getting tooth decay, whether that’s tooth decay that causes a small cavity or that causes a large cavity that might need a root canal treatment or extractions and replacement with more expensive therapy,” he says.

The study focused on children and teens, and for good reason. About 42 percent of children ages 2 to 11 have had dental caries in their primary teeth, according to the National Institute of Dental and Craniofacial Research, while 23 percent of children ages 2 to 11 have untreated dental caries. Parents play a critical role when it comes to preventing dental decay and teaching their children healthy habits. That includes finding a dental home.

More from the author: The risks and rewards of mail-order braces

“We want very young children to start using fluoride toothpaste from the time that their first teeth come in, about 6 months of age, and for infants to be seen by a dentist by the time they’re 1 year old,” Dr. Pollick says. “This is important not so much because we’re going to fix the cavities that they may have, but hopefully we’ll provide guidance to the parents on how to prevent getting cavities. If it’s deemed that the child is at high risk of tooth decay, then additional fluoride can be used. It can be applied in the form of a varnish to the teeth and that provides an added benefit to those children that are deemed as high risk of tooth decay.

“In areas where there’s very little fluoride in the water, where they don’t have fluoridated water either naturally occurring or adjusted, if the child is deemed to be at high risk by a pediatrician or a dentist, then in those low fluoride water areas, a fluoride supplement can be prescribed to be taken on a daily basis to supplement the diet where they’re not getting the fluoride from the water,” he adds. “That’s an additional way of providing the needed fluoride to prevent getting cavities.”

The full study, titled “Water Fluoridation and Dental Caries in U.S. Children and Adolescents,” appeared in the Journal of Dental Research. 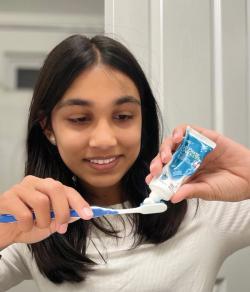