Both of the materials are marketed as biocompatible, but the study found the leach compounds that can induce severe toxicity in oocytes, the immature precursor of eggs. The research team was working to validate the use of commercially available resins for printing materials that can be used to culture reproductive cells, according to a press release.

The compounds leaching from the resins were studied using mass spectroscopy, and the likely culprit was found to be Tinuvin-292, which is used as a light stabilizer in many plastic materials.

The current research only looked at egg toxicity in an in vitro setting, but researchers say their findings point to the need for more research to determine if the same negative impacts occur in vivo. Further research will look into that issue, and as well as into human exposure levels to Tinuvin-292.

The study was recently published in the journal Chemosphere. 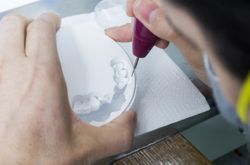 Zirconia from A to Z

The Benefits of Local Anesthetic Buffering: A conversation with Jason Goodchild, DMD