Mouthbreathers beware: Annoying your spouse isn’t the only downside of breathing through your mouth while you sleep. A new study has found that people who breathe through their mouth while sleeping are at a higher risk for tooth decay.

Mouthbreathers beware: Annoying your spouse isn’t the only downside of breathing through your mouth while you sleep. A new study has found that people who breathe through their mouth while sleeping are at a higher risk for tooth decay.

Saliva plays a key role in caries prevention in a variety of ways (a recent study found that salivary mucins limit the growth of cavity-causing bacterial biofilm that forms on a tooth’s surface), and mouth breathing can dry out the mouth. This can cause the oral environment to become acidic, and higher acidity levels can lead to the erosion and loss of tooth enamel.

But can breathing through your mouth overnight really affect overall acidity? The study, out of the University of Otago’s Sir John Walsh Research Institute in New Zealand, analyzed oral pH levels to see if sleeping open- or closed-mouthed made a difference.

While they slept, the 10 study participants wore a device that continuously recorded the pH and temperature of their mouths.  To ensure that participants breathed through their mouth, they wore a nose clip for two of the four nights for comparison purposes.

Researchers discovered that on the nights that the participants were breathing through their noses, their mouths had a neutral pH level of seven (pH levels above seven are defined as acidic in nature, while those below seven are considered alkaline or basic). When mouth breathing however, the pH levels dropped to a slightly acidic level of 6.6, while some periodically even dropped as low as 3.6. According to researchers, this drastic drop is below the critical 5.5 pH threshold, when tooth enamel can begin to demineralize.

"Intraoral pH decreased slowly over the hours of sleep in all participants, but showed greater falls over a longer period of time when participants were forced to mouth breathe," said lead study author Joanne Choi. “Our findings support the idea that mouth breathing may indeed be a causal factor for dental diseases such as enamel erosion and caries."

The full study, "Intraoral pH and temperature during sleep with and without mouth breathing," was published in the Journal of Oral Rehabilitation. 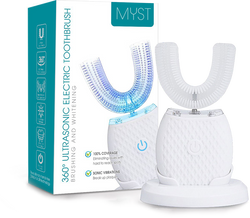