How to use technology to create the perfect impression

Impression taking has changed in many ways over the years with the advent and implementation of newer products and techniques. The majority of impressions are performed using closed bite tray systems. Research suggests that about 90% of all impressions sent to laboratories have various errors incorporated into them.1

Many common impression errors can be eliminated by using a custom full-arch impression tray that has better adaptation or is custom fabricated.2 However, time and/or additional expense are typical reasons custom trays are not used very often.

Time for a change

If you are tired of not getting accurate impressions, or having distortion from using typical closed bite trays, then you might be interested in a significantly different type of stock moldable impression tray that can provide impressions of the same quality as a custom tray technique.3

Traditionally, full-arch stock impression trays come in three sizes (small, medium, large and occasionally extra-large) for the upper and lower arches. The overall shapes of the trays are the same except for the size increase.

The limitation of only having three or four size options available for any given patient makes it more challenging to find a properly fitting tray. Oftentimes an oversized tray would need to be used because smaller sizes would not fit. Using too large of an impression tray, however, can lead to excessive amounts of impression material and poor material adaptation around the teeth.

Impression trays are meant to closely adapt to the size and length of the arch, the position of the teeth, and the height of the palate to provide the best results. It is no surprise there has not been a stock impression tray that can accurately approximate all the different shapes and sizes of the mouth, hence the use of custom fabricated impression trays has been the only true accurate alternative until now.

The impression material’s chemical reaction of the base and catalyst when used in excessive or thick amounts can lead to shrinkage during the setting reaction. This could lead to an inaccurate impression that has the potential for shape and dimensional distortion.4-6 In an effort to minimize this type of shrinkage, the minimum amount of impression material should be used to provide a uniform and complete coating of the dentition.

[Related: Impression Materials 360°: How to choose the right impression material]

This can be achieved by using a properly adapted custom or potentially a well-adapted or customizable prefabricated tray system. Custom trays have been shown in the literature to provide some of the most accurate impressions because of their intimate adaptation allowing for complete uniform coverage of the dentition with impression material.7-11 Unfortunately this procedure is often not favored because of the time expenditure on the dental office or the expense if laboratory personnel are used to fabricate the custom tray.12 Clinician’s Choice has developed the HeatWave customizable full-arch tray system so dental practitioners can have a custom tray fit, without the burden of time and the cost associated with traditional custom tray fabrication (Fig. 1).

The HeatWave System has eight different sizes (four maxillary and four mandibular) accommodating square, round and gothic arch types. The ability to custom fit any tray allows for less material use and better, thinner adaptation of material, thereby creating less potential distortion. At the same time, using less impression material can save you money not only because you’re using less material, but you’re also doing fewer remakes, which require additional time and impression material.

Flexing in the tray derived from the tight mesh system being distorted from biting pressure, which pulls in the sides of the plastic tray, is another possible problem. Additionally, distortion with closed bite tray systems can occur while pouring the model stone into the impression, as the weight of the model stone can potentially cause the impression material to deflect.

Typically if distortion has occurred in the tray or the impression material, it is not evident until the day of delivery when the restoration does not fit properly or requires excessive adjustments. Full-arch trays are often necessary when fabricating more than one indirect restoration or a removable appliance, but should be used more often to achieve better results. Closed bite tray systems are not capable of providing or capturing enough information about occlusion, excursive movements, tissues, and bone support.

However, closed bite trays are beneficial in that one size can fit virtually every patient, but should only be used when a patient has a limited opening or tori impingement on the tray, a severe gag ref lex, or cuspid rise. Because most full-arch trays have to be sized, choosing the proper tray size for many full-arch tray systems can mean having to try-in numerous sizes until you find the one tray that satisfies getting all the teeth inside the perimeter of the tray with no concern for ideal adaptation to the arch form. The trays that did not fit have to be sterilized, which takes up more time and space in the autoclave, creating further costs.

Read more on the next page ...

HeatWave adapts considerably better than other impression trays. The HeatWave system eliminates the problem of multiple try-ins with impression trays by using the included measuring caliper to measure around the premolar and molar area so anyone can quickly measure the arch. The caliper is then placed onto the measuring chart included in the system to determine the proper size tray. The caliper system measures arch width and angulation, allowing you to select the correct size the first time.

The system’s four maxillary and four mandibular anatomical shapes are molded from a thermoplastic material. The HeatWave system’s anatomical shapes often mimic the natural anatomy so well they don’t need to be customized. The tray’s higher palate design provides better adaptation and pressure around the arch during insertion, which reduces the impression space and provides better adaptation, while also compressing impression material down into the gingival tissues for better marginal detail. The reduced space allows for thinner and better adaptation of the impression material as well as providing a substantial savings of 25% to 30% less impression material. Should a tray not adapt well to a patient’s dentition, it can be quickly and easily modified to fit.

The thermoplastic material the HeatWave trays are comprised of can be custom-molded chairside after only a minute of immersion in a water bath at 158°F. Upon becoming pliable the trays can be adapted to preexisting models or modified manually before insertion.

This ability to customize the tray lends itself well for those occasional cases where the stock tray requires better adaptation to the dentition. Typically prefabricated trays do not adapt well to typical problems that we encounter when taking impressions like, tori, exostoses, narrow or wide arches, large tuberosities, bone thickness, ectopic eruption,or molar interferences. The trays also can be pulled so they can be lengthened or extruded to capture third molar impressions instead of adding wax or modeling compounds onto the end of stock trays. Should the need ever arise, the same thermoplastic trays have been made in quadrant forms as well for over impressions to make provisionals or to do small pick-up impressions. HeatWave quadrant trays are useful for patients with a high gag reflex or large tongue or tori or limited access.

Clinician’s Choice has improved upon the stock full arch tray system so it better mimics the patient’s arch form and has the ability to be customized instantly, allowing for an improved fit with better adaptation, a more accurate impression and less waste.

The patient’s arch shape was narrower in the premaxilla and wider by the second molars (gothic shape). The tray was placed in a 158°F water bath for about 60 seconds. It became pliable and was elongated and widened to allow for the second molars to be seated in the tray. The sides of the tray were adapted to the preliminary model, thereby providing less space in the premaxilla for better impression material adaptation, while in the posterior arch the tray was then compressed around the molars (Figs. 2-13). Figures 2-7 above.

FIGS. 6-9 Case No. 1 continued. The caliper is used to measure the width of the arch, which can then be used on the chart to indicate the best size of tray to select. Notice the fit is good, except where the second molars bind on the tray slightly.

FIGS. 10-13 Case No. 1 continued. The HeatWave tray after a one minute immersion in hot water followed by some adaptation of the tray to the model. The excellent adaptation and custom fit impression for veneers.

See more Cases on the next page ...

The typical small stock tray would not fit because of impingement on the second molars. This would typically necessitate using the next larger stock tray size. In about a minute, the ideal adaptation of the small stock tray was instantly customized to provide ideal placement and use.

In the posterior arch, the tray was widened and extruded to allow for proper seating of the tray around the molars while the anterior was adapted just a little more to make the fit even better than the stock tray already offered. This again reduces material waste and provides better adaptation to assist in getting the best possible impression on the first attempt. HeatWave trays also ensure greater patient comfort by using a precisely adapted tray as compared to an oversized tray that could rub or pinch against other areas, or stretch anatomies and necessitate more impression material (Figs. 14-17).

FIG. 14-17 Case No. 2. The HeatWave impression trays custom fit for two anterior ceramic restorations. The typical small stock tray would not fit because of impingement on the second molars. This would typically necessitate using the next larger stock tray size by a manufacturer. In about a minute, the ideal adaptation of the small stock tray is instantly customized to provide ideal placement and use.

The typical stock tray would not work because of mandibular tori impingement behind the anterior teeth. This would typically necessitate a custom tray or a closed bite tray. However, in 1 minute of immersion in a water bath at 160°F, the HeatWave tray can be modified with just a little thumb pressure to provide relief for the tori and allow for ideal adaptation and complete seating of the impression tray (Fig. 18). 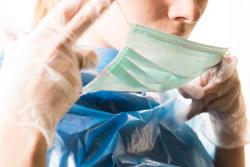 The Most Overlooked Areas of Infection Control