How to create a digital lab

A healthy, fully-digital dental lab isn't impossible-see how one owner did it.

On the shore of Lough Corrib in Ireland stands Ashford Castle, a medieval castle from the 13th century. The five-star hotel has attracted a long list of notable guests, from princes to queens, actors and US presidents. Its unique personality, charm, and friendly customer service inspired Sean Thompson to name his orthodontic laboratory after Ashford with the aim to profess the same qualities for the orthodontic industry.

Having worked for several years in the Orthodontic and Maxillofacial Department at Sunderland Royal Hospital, Sean identified the growing demand for orthodontics, but the distinct shortage of high-quality laboratories capable of offering specialized orthodontic technical services.

He founded Ashford Orthodontics in his garage in 2001, and as the clientele quickly started to expand, Craig Stevens and Graeme Winyard joined the board. Today, the three specialised orthodontic technicians manage the largest orthodontic laboratory in the United Kingdom with a 12,000 square foot facility and over 50 employees.

Sean has always strived to keep the lab at the forefront of the industry, which today is more important than ever, as orthodontics is in the midst of undergoing its most significant technological evolution to date, from traditional workflows to digital technologies.

Read on to learn to how Ashford created a digital department from scratch that now produces 1,200 clear aligners and retainers a month running a fleet of 12 3D printers, and achieves a cost advantage that empowers the lab to grow and attract new customers.

Starting and scaling a digital department

“Digital orthodontics was something we knew we had to get into. We couldn't afford not to do it if we really wanted to be a leading player within orthodontics,” Sean said. “We wanted to be an early implementer. Any business has to plan four or five years ahead, and you don't want to be left behind when others are moving on.”

At first, the lab purchased two Stratasys Objet30 3D printers; industrial machines that were marketed specifically for orthodontics. They gained experience with the digital workflow and started accommodating digital jobs from clinicians, but because of the high cost and complexity of operating these large-scale 3D printers, the lab struggled to make a viable case for digital in their business.

“You had to invest a lot in software upgrades and keeping [the machines] serviced and calibrated every year, to the point that once you factor in the actual resin costs, you couldn't really produce a model for the price that we wanted to produce it, and certainly not in the volume we wanted,” Sean said.

“Plus with any printer, if you build your business around it, you can't just have one, you need to have two, and you need to run both of them at 50 percent. In case one goes down, you can always upscale the other to 100 percent. With the Stratasys machines, it was very expensive to grow a bank of those printers, so we decided that we would want a smaller printer, which could work harder for us, but then we could keep adding them. That's why we decided to go with Formlabs, and we've never regretted it,” Sean said.

The lab started off with one printer, then quickly scaled up to two, four, and at present, they’re running 12 Form 2 printers. At the same time, the number of personnel in the digital department has grown from one technician to a team of eight digital technologists who are a blend of qualified technicians and computer experts.

“The Form 2 is very reliable; we call it a workhorse. We know when we go home at night that when we come in in the morning, everything will be printed. There's not going to be a failure; everything will be there. Because of that, we can build our business around them,” Sean said.

Ashford follows a well-structured daily schedule that easily accommodated the digital workflow. Each working day, the lab has a cutoff time at about 3 pm. They review new scans sent in by customers, plan treatments and 3D print the digital models overnight. Early the next morning, a technician cleans and dries the 3D printed parts, and slightly later another technician thermoforms the clear aligners on the finished models. By the time most technicians arrive at the lab, the aligners are ready for post-processing.

“Once you've got a model to work on, there's very little difference. If you are a traditional lab and you want to go and push the boundaries to digital, once you've done the learning side of it, the manufacturing side is pretty similar,” Sean said.

In the afternoon, technicians package and dispatch the finished appliances, so they’re at the clinicians within 48 hours. Overall, the digital workflow saves 24 hours as the scans arrive at the lab instantly, allowing Ashford to turn around jobs quicker and accommodate more work.

“It works absolutely perfect for us. We launch the printers just before we go home at night; that's our night shift. We come in the next morning and by then, the night shift has done their job. It doesn't matter if they're sitting there for two hours, four hours, six hours-it's done. We totally rely on that coming in on the morning, so it's the quality and reliability of the print that matters to us,” Sean said.

The lab has also learned to leverage the multiple printers and the large build platform of the Form 2.

“It's quite easy for us just spread a few models along 10 or 12 printers and have them printed in a couple of hours. So if we do need to do quick runs, we can accommodate them across all the printers instead of putting them all on one. We find that that works very well for our business,” Sean said.

Digital technology also allows the lab to store and access digital models at anytime online, which has proven to be beneficial with replacement retainers.

“There's no time lapse due to a child breaking or losing their retainer and having to go to the dentist to get a new impression. Teeth are drifting all the time and relapse is happening. We can just pull the file from the cloud-where we store them basically for free-print the model, create the appliance, and even send it directly to the patient,” Sean said.

One of the greatest benefits of digital technology-particularly for orthodontics-is that the lab can reuse the 3D printed model to create multiple appliances.

“A common trend now is to debond the brackets and instantly fit all the retention products chairside. By removing the brackets digitally, we can make an Essix, bonded, or a Hawley retainer, and a whitening tray all on the same model which simply isn't possible via the traditional route and plaster models,“ Sean said.

Sean believes that digital technology can only surpass traditional workflows if it’s cost-effective. By passing savings on to their clients, they’re opening up the digital market to more and more clinicians, which Sean believes will be the way forward for everybody.

“It shouldn't cost you any more to provide your services to your clients and patients via the digital route than via the traditional impression route. So what we've done is quite simply that we swapped the cost of the plaster models-which aren't needed anymore-with the cost of the resin model. Therefore, your lab bill is exactly the same, whether it's done via the traditional route or the digital route, except you can have things back 24 hours sooner,” Sean said.

This value proposition has proven to be successful in attracting new customers from the UK, as well as internationally. While the lab makes only small margins on the Essix retainers and digital models, they’re highly valuable as trust builders.

“We've got new clients coming to us every day, who have never used us before, so they don't know if the quality is going to be good or if the customer service is going to be reliable. When they realize that what we're providing here is very good quality, they trust us to send us the more complex appliances. So invariably, within two months of getting a new client who wants to use our services for digital orthodontics, they start asking if we can do twin blocks, fixed appliances, or functionals. Before we know it, they're sending us lots and lots of work, because we can accommodate all of their needs,” Sean said.

The lab now provides services entirely digitally to three practices that don't have any impression material in their offices. They can only do that by Ashford being able to service all their needs via the digital route.

“When we first started with the digital side of things, it accounted for maybe two percent of our business. Just this last month it's around 15 percent, and it is the fastest growing sector within the laboratory,” Sean said. 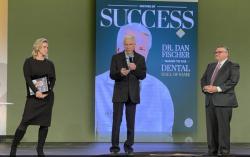