Dental Lab Products looks at the hourly and annual salary numbers for dental lab technicians in the United States.

Whether the millions of people who sit in a dentists’ chair each year know it or not, dental technicians are a key part of the workflow that gets restorations into their mouths. There are over 100,000 dentists in the United States-and yet, all of those implants, crowns, bridges, dentures and more come from only 35,320 dental technicians.

How much are dental lab technicians making?

First, a quick look at the macro-level: In the United States, of the 35,320 people who identified as “dental laboratory technician,” the average annual wage was $40,140.  That’s over $7,000 less than the national average yearly wage among all job-holders. On average, dental technicians made $19.30 per hour, which is more than three dollars less than the national average (at the top of the list, anesthesiologists made a stunning $118.42 per hour on average!).

Must read: What dentists want labs to know

So where are dental technicians making the most money-and where are they just barely getting paid?

Next page: Where in the U.S.A. is the money?

Where all the lab techs at?

An industry in transition

Next page: Dissecting the data ...

Now, that’s not necessarily bad news-that could mean people retired, or it could be a sign of increasing mergers in the industry that come with transitions for some technicians to managerial or specialty roles. But it does suggest there are fewer technicians than before-which might mean there’s more work to be had, or that there isn’t enough work to support the number of laboratory technicians. Over a five-year period (2009-2014), the number of general dentists rose from 86,270 to 97,990, so there should still be dental demand, but perhaps the advent of in-office capabilities and other clinic-side technologies put the number of dental technicians in flux. The next few years will be telling.

Important read: How to counter business threats by going digital

Additionally, it’s interesting to see that Montana and Alaska both remain on the highest-paying list for dental laboratory technicians from 2009-2014. Perhaps there’s a need there that isn’t quite being met-there are so few technicians that pay seems to be higher in those states than elsewhere with very high concentration of laboratories. Check out the full report to see where your region ranks for pay-and if there are other regions close by that might have greater demand.

Overall, this snapshot of the wage and labor landscape is a mixed bag for the dental laboratory industry. It shows an industry working to reverse a decline, trying to stop a loss of 10,000 industry jobs in the last decade. It also shows an industry that’s growing slowly in terms of pay. Finally, it shows the lab technicians position on the dental team is somewhere in the middle in terms of wages.

Another perspective: Why you don't have to be afraid of chairside CAD/CAM

The lab industry will need to grapple with these realities, and figure out what equipment, services and education might be necessary to stem the tide of job constriction and to continue the growth of salaries. With some continued hard work, and the rapidly growing number of dentists, perhaps dental laboratory technicians can reclaim the market and remind the entire dental team how valuable technician work really is.

Top photo is from Wikimedia Commons. Permission is granted to copy, distribute and/or modify this photo under the terms of the GNU Free Documentation License, Version 1.2 or any later version published by the Free Software Foundation; with no Invariant Sections, no Front-Cover Texts, and no Back-Cover Texts. A copy of the license is included in the section entitled GNU Free Documentation License. 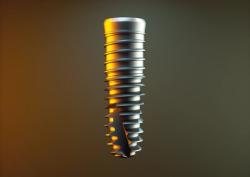