Where is it written that going to the dentist can’t be enjoyable? Or that a patient can’t sip a glass of beer or wine while waiting for an appointment or even borrow a laptop to surf the net? It’s not in any book that Dr. Clint Herzog, founder of Floss Dental, a practice with eight locations in Dallas and Houston, has ever read.

Where is it written that going to the dentist can’t be enjoyable? Or that a patient can’t sip a glass of beer or wine while waiting for an appointment or even borrow a laptop to surf the net?

It’s not in any book that Dr. Clint Herzog, founder of Floss Dental, a practice with eight locations in Dallas and Houston, has ever read.

After hearing time after time from patients about how they dreaded going to the dentist, Herzog, who has been in practice for 11 years, decided he needed to do something to change the experience.

“I got tired of patients saying they don’t like going to the dentist,” he said. “I started asking patients to drive down to the core of what they want--without any preconceived notions.”

Talking with patients and listening to their desires is how Herzog developed his approach to dentistry that he has dubbed his “FLOSSophy.” He maintains that quality dentistry can be provided in an upscale environment with the latest technology and at prices people can afford.

A little bit of pampering and an attempt to make the experience more enjoyable means that patients at Floss Dental can choose to have a glass of wine or beer or water when they arrive for their appointments, get a tour of the office, and that every staffer knows their name.

“It makes the experience feel high end and patients feel taken care of,” Herzog said. “But it’s not a spa.”

He also provides other perks and incentives that patients appreciate such as a strong topical so that don’t feel injections and free, in-office teeth whitening for every patient once a year.

“That (teeth whitening) is like your adult lollipop,” Herzog said.

Herzog’s new FLOSSophy also means he provides in-network pricing, which was a high priority among the patients he talked to as he planned the transformation.

“Most dentists make more money if they’re not in-network, but it’s not really what’s best for the patient,” Herzog said.

Describing what his practice was like before he initiated these changes, he said it was pretty run of the mill.

“It was fee-for-service,” he said. “It was what I thought a dentist office should be where the dentist wears a white lab coat and I’m the dentist and you’re the patient.”

By putting patients in the driver’s seat and letting them tell him what they wanted and by running his business efficiently, Herzog said he has seen the company thrive. To counter the impact of going in-network, he has taken such measures as asking vendors to reduce their costs.

“We deal with a lot equipment companies and other suppliers,” he said. “We lean on vendors to drive their costs down.”

The new formula, which he put in place in 2008, is working, according to Herzog, who has seen the business grow to have 60 employees, eight offices and four more under construction.

“We’ve doubled in size every year for the last three years,” said Herzog.

Some of the challenges he has faced include training staff in the new protocols, especially in how to make patients feel at home, while still maintaining an efficient operation.

“That’s why we do a pretty intense training on culture,” he said.

The vibe of a traditional dental office has not always seemed welcoming, he said. One of his goals is to change that.

“The energy of dental office can feel like a clique because people who are there are working all day together and then some (patients) feel ostracized,” he said.

To put make patients feel comfortable, he has created offices with such touches as custom artwork on the walls, up-to-date furnishings, pendant lighting and flat screen TVs. Floss even hold parties with DJs for patients on occasion.

“It’s cool and fun,” he said, to describe the décor. “We’re pretty edgy. There is a lot of personality to our office.”

Today, Herzog spends more of his time managing the business and doing training than working with patients. Those tasks are in keeping with what he likes to do.

“My true passion in life is transforming people,” said Herzog, adding that he plans to take the business national.

He said going to work every day is a joy, especially since he created the new vision for his business, and has seen it grow.

“I don’t remember the last day I felt like I was going to work,” he said. “That’s such a gift.” 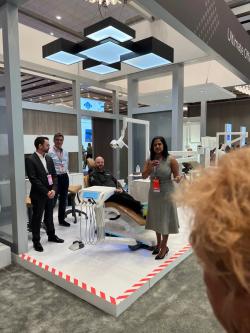 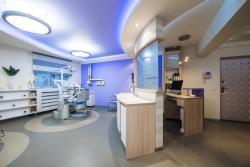