Why you should treat employees as stakeholders [VIDEO]

“The term employees was something that was created in the Industrial Age and really should be replaced with stakeholders in today’s modern era,” Blakeman said. “This is the Participation Age, and today is about sharing and participating together in building a great company.”

Blakeman, who authored the book, “Why Employees Are Always A Bad Idea” among other titles, discussed the perceived differences between employees and stakeholders.

Additionally, Blakeman said, employees need be told what to do while stakeholders don’t need that kind of supervision and they actually have the freedom to question things to see if there’s a better way to get the job done.

To hear more from Blakeman about the difference between employees and stakeholders and why your dental practice should be filled with the latter and not the former, click below to hear his thoughts. 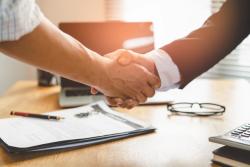