Technology seems scary — but better results are worth it

Getting into the latest technologies can seem overwhelming, but the results speak for themselves.

As dentistry and technology evolve, we as practitioners of this art and science are benefitting tremendously. I consider myself extremely lucky in this regard for the simple fact that even, before the intertwining of technology and dentistry, I was a tech lover and looked upon technology as my hobby.

That simple lucky break put me in the right place at the right time as the tech sector exploded. Because of that, I was early in the adoption curve simply because I was fascinated and intrigued about the possibilities of merging my career and my hobby.

However, even for a diehard technophile like me, there have been times when a new device or technique comes along that makes me hesitate and evaluate adoption. As regular readers of this column will know, I’m a big fan of cone beam computed tomography (CBCT) for a lot of reasons.

However, one of the biggest reasons I became involved with the technology is implants. Somewhere around 2007-2009 I decided to learn about implants. Up to that point, I had always considered implants in the realm of the specialist. I was restoring quite a few, but the actual placement was something I considered better left to others.

However, my investment in CBCT had started me down a rabbit hole of insatiable knowledge about 3D and the more I learned, the more I was seeing what an incredible role CBCT was playing in implant placement. For the longest time, implants seemed (to me) to be about 20 percent science and 80 percent art.

Now don’t get me wrong, the practitioner certainly needed to know all the surgical principles both in setup and delivery. However, the nuances of the X, Y and Z axes was the part that befuddled me and made this much more about talent than technique. Being a few degrees off in X and/or Y can be the difference between long-term success and failure of the implant; while being off a small amount in Z (depth) can end up with the implant in the sinus or the inferior alveolar canal.

I know for those of you who place implants on a regular basis that it normally is a pretty straightforward and easy process. I think what happened to me was that in all of my interactions with experts in surgery and 3D, I had seen so many images of cases that had gone tragically wrong that I became hesitant to jump in with minimal experience. It’s probably the curse of being “The Technology Evangelist.”

Related article: How technology is changing the implant workflow

Because of my exposure to so many experts, I had seen a plethora of cases with bad outcomes that my expert friends had been brought in to try and save. This most likely gave me the unfortunate perception that mistakes were common.

Yet, I think it’s human nature to assume that something you don’t know how to do is much more complicated than it sometimes is. There’s also the potential of legal ramifications when dealing with any type of medical/dental procedure. That potential is always something lingering in the back of a practitioner’s mind whenever he or she begins to learn and practice a new procedure. I’m confident that many of you have those same feelings.

Currently about 10 percent of practicing dentists are placing implants. From what I glean from conversations with people who attend my lectures or who I see at conferences, it seems that lots more doctors would like to place implants if only there was a way to decrease the learning curve. That’s where CBCT enters into this conversation.

Guided implant placement is not only a game changer, it has pretty much created a whole new game. For perhaps the first time in the history of dentistry, we have entered an era in which the mind takes precedence over the hands. By that I mean the technology now puts most of the “doctoring” in the treatment planning and digital case creation.

Here’s the way it works: In my office, we don’t currently scan every new patient as standard operating procedure. Instead, we take a digital panoramic, digital bitewings and selected PAs if indicated. A cone beam scan is done if an implant is planned. Not everyone who wants or needs an implant is a candidate. It’s incredibly important to conduct a thorough patient interview and a detailed clinical exam before even considering the candidate for implant surgery. If the interview and exam are positive, then we move on to CBCT.

The joy of CBCT scans is that you can see everything in every direction. I like to tell patients that “It allows me to basically hold your head in the palm of my hand and look at you from any angle possible.” Many CBCT programs allow for digital treatment planning; however, the implant companies have been quick to create high-quality treatment planning programs that are designed to specifically help you design cases for their particular systems.

The scan volume is opened and then the user selects the implant he or she intends to place. This means you select the company, implant type, length and diameter. Once this is done, a 3D rendering of the implant appears on the screen and this is where the real magic begins. The implant can be moved around inside the volume utilizing drag and drop. This allows the user to try different areas of placement and to fi ne tune things such as X and Y angulation.

By tracing the inferior alveolar canal, the user can see how close the implant is to the nerve. Similarly, in maxillary placement, the scan can be rotated to allow the user to see the implant from all angles and make sure it’s the recommended distance away from the floor of the sinus. The programs allow for very minute adjustments to the implant in all directions until the doctor has it perfectly placed.

It’s a great benefit to be able to rotate the scan in all directions to check that the implant is placed exactly where it needs to be. Once the treatment planning/digital placement is completed, the file can be sent to a lab that creates the surgical guide. However, as technology has improved, it’s now not even necessary to send the file out. Instead, the surgical guide can be either milled or printed in house if the office has a mill or 3D printer. This can theoretically take the process down to “treatment plan today, do the surgery tomorrow.”

Related article: How CAD/CAM dentistry makes me a better dentist

Some of the best improvements in our clinical practices have come from the intertwining of two game-changing technologies. CBCT and implants are just one more example of this. As scanning and digital creation get better, our implant future will only get brighter. 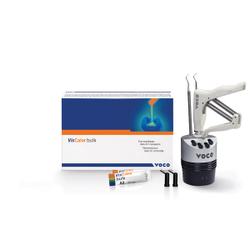 Expect the Unexpected With VisCalor bulk