Study shows why diabetics are more susceptible to periodontitis

Researchers at the University of Pennsylvania have discovered that diabetes causes changes in the oral microbiome that lead to inflammation and risk of bone loss.

Diabetics are twice as likely as their non-diabetic counterparts to lose teeth, according to a 2015 study from Duke University. While researchers determined that people with diabetes are more susceptible to periodontitis, they didn’t know why this link existed. New research out of the University of Pennsylvania sheds some light on the connection between diabetes and periodontal disease.

To take the study one step further, the team of researchers transferred microorganisms from the diabetic mice to normal germ-free mice that had been raised without exposure to any microbes. These mice also developed bone loss, and markers of inflammation increased.

“Diabetes caused a change in the composition of the oral bacteria. This change resulted in a bacterial composition that was more pathogenic and stimulated more inflammation in the gums and greater loss of bone around the teeth,” Graves says.

As for next steps, Graves says he would like to carry out similar studies in humans.

“Periodontal disease is closely linked to diabetes. Both Type 1 and Type 2 diabetes increase the risk and severity of periodontitis, an irreversible form of periodontal disease where bone that supports the tooth is lost due to bacteria-induced infection. The degree to which diabetes affects periodontal disease is directly linked to the level of glycemic control, particularly if HbA1c levels are high. Our study underscores the fact that diabetes alters the microbiome to make it more pathogenic. Thus, diabetic individuals need to pay particular attention to their oral hygiene, maintain good plaque control and maintain good control of their blood glucose levels.” 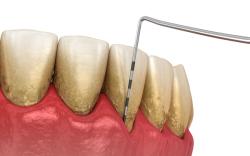