Researchers at Imperial College London and King’s College London have found that the careful operation of dental handpieces can minimize the spread of aerosols carrying the coronavirus disease 2019 (COVID-19), the virus that causes COVID-19. These aerosols are generated when saliva mixes with water and air streams used in dental procedures.

The study used the engineering expertise at Imperial and clinical expertise at King’s College London’s Faculty of Dentistry, Oral * Craniofacial Sciences. These researchers have measured and analyzed aerosol generation during dental procedures and have recommended ways to prevent contamination to protect both staff and patients. Their results, which were published this week in The Journal of Dental Research, are already being included as evidence in guides for dental practices in the United Kingdom during the pandemic.

In the study, “Mechanisms of Atomization from Rotary Dental Instruments and Its Mitigation”, researchers suggest avoiding the use of dental handpieces that use a mixture of air and water as the abrasion coolants and recommend care when selecting and controlling handpiece rotation speeds for those instruments that only use water as a coolant. The guidelines allow for some procedures, such as dental fillings, to be performed while producing 60 times fewer aerosol droplets than conventional usage.

“Aerosols are a known transmission route for the virus behind COVID-19, so, with our colleagues at King’s, we have tested suggested solutions that reduce the amount of aerosols produced in the first place,” said the study’s lead author Dr Antonis Sergis of Imperial College’s Department of Mechanical Engineering. “These could help reduce the risk of transmission during dental procedures.”

Researchers tested how aerosols are generated during procedures such as decay removal, applying and polishing fillings, and adjusting protheses in dental clinical rooms at Guy’s Hospital in London. Aerosol generation was measured using high-speed cameras and lasers. This data was then used to suggest adaptations.

“Aerosols are a known transmission route for the virus behind COVID-19, so, with our colleagues...we have tested suggested solutions that reduce the amount of aerosols produced in the first place. These could help reduce the risk of transmission during dental procedures,” said co-author Dr Owen Addison, a professor at King’s College London’s Faculty of Dentistry, Oral & Craniofacial Sciences. “This important work describes the basic mechanisms that lead to the features of dental aerosols that we currently consider to be high risk. This has enabled us to choose handpiece parameters to keep our patients and the dental team safe at this difficult time. Although we cannot provide every procedure, because slowing our drills is much less efficient, we now have the basis to do more than we have done in the last 6 months.”

The study found that commonly used air turbine handpieces create dense clouds of aerosol droplets that spread as fast as 12 meters per second and can quickly contaminate an entire operatory. Just 1 mm of saliva from an infected patient contains up to 120 million copies of the virus, each having the ability to infect others.

A high torque electric micromotor was tested with and without the use of water and air streams. Researchers found that this type of handpiece at speeds less than 100,000 rpm without air streams produced 60 times fewer droplets than the air turbine variety.

Additionally, they found that aerosol concentration and spread within a room is dependent on the positioning of the patient, the presence of ventilation systems, and the room’s size and geometry. This is also influenced by the speed and direction of the aerosol itself, which can be affected by the type of cutting instrument (bur) and the amount of cooling water used.

Understanding how to reduce the amount of aerosols generated could help dentists practice more and help patients get needed treatment, while still protecting staff and patients, according to researchers. Their research is ongoing, and they are currently assessing the risk of infection by quantifying the amount of saliva mixed into generated aerosols by dental instruments. To read the study in full, click here. 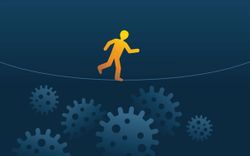 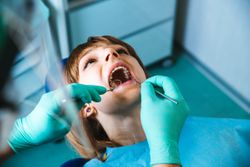 Hygiene in the Age of COVID: What to Expect in the New Normal