Looking at the most recent data from the US Bureau of Labor Statistics – and what it means to you Ideally, we see our dentists twice a year – just for cleanings and incident-free checkups. Regrettably, there are times when more work is required, and in some cases, crowns, bridges and maybe even dentures are needed.

Ideally, we see our dentists twice a year – just for cleanings and incident-free checkups. Regrettably, there are times when more work is required, and in some cases, crowns, bridges and maybe even dentures are needed.

While there is plenty of work to go around, the business of working for a dental lab is very dynamic right now. There is a lot of change happening in the industry and it will continue to have an affect on lab technicians.

Related reading: What lab technicians were making two years ago-and how that differs from today

How much money is everyone making?

On the dental team, however, lab technicians made the second least. Dentists made the most with an average of $159,770, dental hygienists made $73,440 and dental assistants made $36,940.

Salaries differ, of course, depending on where the technician is employed, so let’s take a look at where the most money is being made – and who isn’t as fortunate.

Next: Where lab technicians are making the most

The data hasn’t changed much from the previous research in 2014. Most dental technicians still called California home (4,660) while Florida took second place (3,020) and Texas coming in third (2,260). Of California’s 4,660 dental techs, 1,310 worked in the Los Angeles area. The New York-Jersey City-White Plains region came in second place with 1,160 technicians. On the other end of the spectrum, Alaska only had 60 technicians and Maine had 80.

Trending article: The top 10 states to be a dental technician

But salaries and employment levels don’t necessarily go hand-in-hand. While California boasted the most dental technicians, it ranks toward the middle of the pack in terms of pay. Dental technicians in Alaska made more than any other state -- $53,030. It is worth pointing out, however, that the BLS data lists the District of Columbia as a state and the 50 technicians there are the ones skewing salary data – they earned, on average, $78,410 per year.

Trending article: The states with the best and worst oral health

Next: What does the future hold?

What the future holds

The BLS’s employment projections lump dental lab techs in with ophthalmic laboratory and medical appliance technicians, and all three careers are projected to grow 10 percent from 2014 to 2024, faster than the average for all occupations.

Dental lab technicians can expect plenty of work, between necessary restorations and elective procedures. For instance, cosmetic procedures -- like veneers – will continue to become less expensive, so demand for these appliances will likely increase.  Accidents and poor oral health, causing damage or loss of teeth, will continue to create a need for dental laboratory technician services.

Trending article: What the future holds for technology in dentistry

The Baby Boomer generation is expected to have an impact on dental labs – for better or worse. First, because the risk of oral cancer increases significantly with age, the demand for dental appliances is expected to increase due to complications requiring cosmetic and functional dental reconstruction.

Conversely, because Baby Boomers and their children took better care of their teeth than previous generations did, they are more likely to retain their teeth and won’t require the amount of full and partial dentures that prior generations needed. That being said, Baby Boomers also have the income and can afford the veneers and implants to improve their smiles.

If the data is correct, there is some good news. The industry is picking up. For more than a decade, dental lab technician jobs dropped. In 2005, for instance, there were more than 45,000 dental technicians. In 2009 that number had dropped to 40,480. That number fell again in 2012-2013 to 36,790, and in 2014 it dropped even further to 35,230. Dropping numbers could be attributed to labs merging, smaller labs being taken over by larger labs, retirements, and maybe even the rise in chairside milling in dentists’ offices, to some degree. But the 2016 data shows something promising – that level rose to 37,110, back to levels higher than 2012-2013.

There are a couple of ways to look at that. On one hand, it is a positive sign for the industry that more jobs were created. That is especially relevant because with the growing popularity of CAD/CAM and chairside milling, a lot of dental lab technicians thought that the jobs would dry up.

On the other hand, with more than 100,000 dentists out there, there should be lots of dental demand. With the numbers of lab technicians increasing, the jobs might not be as competitive as they were a couple of years ago.

The dental lab industry is anything but boring. While it has been in somewhat of a free-fall for the last decade or so, things seem to be looking up. It is a dynamic time right now, and keeping abreast of changing technology is important to stay competitive and remain employed. With the increasing number of dentists – even with competition from chairside milling – there should be plenty of work for dental lab technicians and they will have ample opportunity to show their value and skills to their client doctors and patients. 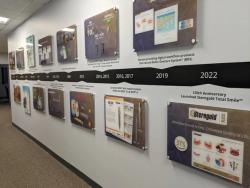