As dental professionals, doing no harm and not pressuring the patient should be part of every interaction.

Mistakes happen, but bad ones motivated by money are a different story. Those kinds of complications could be criminal. I know, there is going to be a lot of email on this article, but I am ok with that. Great writers want you to think and discuss ideas that may change your life. This is one of them.

I received an email from a reader, who had quite the story to tell. David is 26 years old, single, athletic, and is what you might call a “popular” guy. He is well known in his community as he has lived his whole life there. He knows everyone and lives the good life of playing golf and hanging out with his friends. Unfortunately, his incredibly happy existence radically changed 2 months ago when he went to the dentist. He had no idea this could change his life so radically.

He saw Dentist #1, a general dentist, for a root canal who recommended he should have cosmetic dental work. When David was 15, his 2 front teeth were knocked out. He has lived with a flipper ever since. Dentist #1 suggested implants and a dental bridge. David was a bit apprehensive but wanted a specialist to make their recommendations. Online, he found Dentist #2 advertising for a free consultation.

Dentist #2 said he could get implants but kept talking about a bridge, because he wanted to put 2 teeth on either side of the missing teeth. David went back for a few dental visits to have a whitening treatment and to fill a cavity. Several conversations were had about David’s reluctance to have this treatment. David was apprehensive about shaving down 4 teeth to replace 2. He wanted the implants or a new partial, but Dentist #2 would not budge. He kept saying that the bridge treatment was what was needed.

The day came for the scheduled procedure, and David did not want to have it done. He called to cancel the appointment, but the receptionist pressured him to keep the appointment and have the treatment. David kept the appointment with the idea that he would pay the balance on the bill, pay for the cancellation, and apologize for not going through with it.

He arrived and reiterated again with the receptionist that he did not want the procedure, but she would not listen to him. She encouraged him to speak with the dentist. David felt unrelenting pressure by both Dentist #2 and the receptionist to have the procedure even though he did not want it. Before he knew it, he was in the chair and the dentist was shaving down his teeth.

David went home that night with a frightening 6-tooth bridge. This bridge was a complete nightmare. The teeth were too long, hitting his bottom teeth causing him to bite his bottom lip when he ate. As a result, he gained a lisp, and his jaw has been locking and showing signs of temporomandibular joint dysfunction (TMJ). The dentist never made it shorter on the provisional nor the permanent one even though David continued to complain that this was causing so much pain.

His life changed as a result. Depression hit hard. He is isolating from family and friends and is embarrassed to talk as his teeth look ridiculous. When we spoke, David did not understand how he got in this situation, but reports that there was so much pressure he did not feel like he had a choice. This is a tricky thing for him to wrap his mind around. He is normally a confident person who never had any problems setting boundaries and limits with others, but something happened and now he is in this situation.

He has taken good steps as he found Dentist #3 who is planning to redo the bridge and resolve the TMJ symptoms.

When David spoke with me, his anger came through loud and clear. He has every right to his anger. I would be livid if I were in the same situation. His trust in dentists has been seriously damaged because of this nightmare. He was not listened to, and he was manipulated repeatedly.

I made a few suggestions as to other next steps he might take.

We talk about production in most practices 1 way or another. In this case, a patient was harmed because of a procedure he never wanted. Skeptics may say, “Why did he ever have it?” The answer was because the dental staff violated his trust. He was pushed into something he did not want. Whatever the reason he did not get up and walk out of the office does not matter. “Do No Harm” also means listening to the patient instead of the focus being on revenue.

David will be ok. I have faith in him. He is doing what he needs to do to reclaim his life. My question to you the dental professional is whether you have participated in situations like this due to the pressure for production. If so, where do you draw the line?

Please email me at diana2@disussdirectives.com and answer that question. 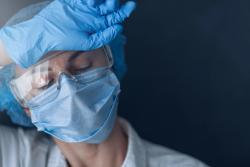