Can chewing gum be used to detect gum inflammation?

Kristen Mott is the associate editor for Dental Products Report and Digital Esthetics.

Researchers in Germany have developed a type of chewing gum that could be used to diagnose inflammation and eventual dental implant failure.

Take a look around and you’ll most likely notice someone popping a piece of chewing gum into his or her mouth. People have been chewing gum for centuries, and in fact, the average person chews more than 300 sticks of gum every year.

Whether you prefer Big Red, Juicy Fruit, Orbit, or Dubble Bubble, chewing gum has been shown to improve your breath, help combat stress and enhance concentration. But what if chewing gum also had the ability to detect gum inflammation and eventual dental implant failure?

Dental implants are a common and effective tooth replacement option, but their failure rate is a major issue. Almost 8 percent of patients with dental implants have been shown to lose at least one implant over a 9-year period.

A group of researchers from the Julius-Maximilians-Universität (JMU) Würzburg in Bavaria, Germany, noted that the ability to screen broad communities for asymptomatic diseases is key to improving population health. However, current screening methods often involve complex tests or require specialists. In order to change this, the researchers set out to develop a quick and affordable screening method. What they came up with is a sensory chewing gum that uses the tongue as a 24/7 detector, allowing for diagnosis by “anyone, anywhere, anytime.”


According to the study, the researchers designed a peptide sensor that was successfully formulated into a chewing gum. In order to test the sensor’s functionality, the researchers incubated it in saliva samples collected from patients with peri-implant disease and saliva samples collected from healthy patients with at least one dental implant. The outcomes were compared using two commercially available tests.

According to Science Daily, in the presence of inflammatory conditions, specific protein-degrading enzymes are activated in the mouth. After five to 10 minutes, these enzymes were shown to break down a special ingredient of the researcher’s chewing gum, which then released a bittering agent.

The researchers state that the results indicate that large amounts of denatonium, a bitter chemical compound, generated through cleavage of the sensor would be easily sensed by the human tongue in patients with inflammation. They believe that their chewing gum diagnostic would introduce several improvements.

“First, it is providing rapid read-out within a few minutes,” the researchers state. "Second, the sensor is featuring a diagnosis from saliva thereby removing the need to collect from sites accessible to a dentist only (sulcus fluid). Third, expert knowledge for interpretation is not required while finally the diagnostic can be used anywhere.

"Therefore, the data provided evidence that the complex kits used today may be complemented or even replaced by much simpler, reliable chewing gum diagnostics. Future applications include the use in a dentist’s office or personal use by anyone, anywhere.”

More from the author: Can a green tea extract help prevent cavities?

The researchers note that the next step is to test the chewing gum in humans to demonstrate the ability to discriminate diseased from healthy groups through taste generation.

The Benefits of Local Anesthetic Buffering: A conversation with Jason Goodchild, DMD 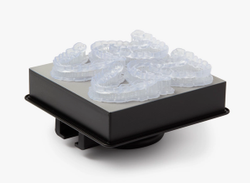