Based on his extensive experience with dentists over the past 30 years, Dr. Roger P. Levin has authored a new book entitled The 31 Biggest Mistakes Dentists Make. His premise is simple. As he says in the introduction, “We can learn from our mistakes. But isn’t it better to learn from other people’s mistakes?”

Based on his extensive experience with dentists over the past 30 years, Dr. Roger P. Levin has authored a new book entitled The 31 Biggest Mistakes Dentists Make. His premise is simple. As he says in the introduction, “We can learn from our mistakes. But isn’t it better to learn from other people’s mistakes?”

Following is an excerpt from the forthcoming book.

Goal setting is probably the single most powerful activity dentists can engage in to reach greater success. In an era when the majority of dental practices have experienced production declines, goal setting can make the difference between growth and decline.

Most dentists don’t have specific goals. They simply go to work hoping for a great day with few problems, and they expect the practice to expand a certain amount each year. Unfortunately, automatic success no longer happens.

I remember one dentist whose practice had declined 17 percent during the recent economic downturn. He was also facing the possibility of decreased insurance reimbursements and two new competitors opening in his area. While his practice ultimately increased production through consulting, it was the goal setting that first catapulted this dentist into action. He was depressed and didn’t know where to start until we suggested that he set 10 goals.

The biggest mistakes dentists make: Relying on your accountant for your vision and goals

Initially, he was concerned that he didn’t yet know how to achieve them, but simply setting them gave him a sense of direction and forward movement. At the end of 12 months, his practice had grown 29 percent, and there was every reason for it to continue growing significantly.

To this day, he credits goal setting for giving him the energy, faith and attitude to bring his practice back from decline and move forward into success.

Every dentist should set at least 10 goals each year. I suggest that goals be tied to the practice vision, which answers the question: Where do you want the practice to be in three years?

It’s also essential that every goal have a deadline and be measurable. A deadline creates accountability, and monitoring progress propels you toward achieving the goal. Each goal should be assigned to a specific team member (or the dentist), and the responsible person should report to the rest of the team each month. Following these steps will ensure that the goals result in stronger practice performance.

The 31 Biggest Mistakes Dentists Makehas now been published and is available for just $59 at the Levin Group Store.

Save $50 on doctor tuition for Dr. Levin’s “Ignite Your Production” seminar in Miami on Jan. 21. To register, go here and use code DPM50. 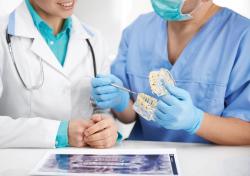 The List: 5 Tips for Top Collaboration Between Dentists and MDs