Best Practices for Waste Disposal in a Dental Practice

There are certain rules and regulations for the type of waste disposal that your practice will have to adhere to.

A single look down a residential street on trash day can reveal just how finicky waste disposal can be. One might think, “Well, it’s all trash. Just put it all in one can”. But that’s rarely the case. Regular trash goes in 1 can, recycling in another, and yard waste in a third. And it gets even more complex in municipalities that require recycling to be sorted by plastics, glass, and paper. Even then, you can’t recycle all paper. In some places, pizza boxes, for instance, can’t be recycled. Those go in the regular trash. Most of us seem to have learned those rules (more or less), but it becomes a more complex issue when waste from medical facilities gets involved – and, unfortunately, those specifics may be confusing.

Regulated waste is the type of waste that The Occupational Safety and Health Administration (OSHA) is concerned with and dictates how it should be handled. Unfortunately, sometimes the difference is misunderstood.

“What I’m noticing is that I don’t think people understand totally know what regulated waste is,” Lisa Kane, DMD, Dental Consultant at Dental Office Compliance of New England says. “Regulated waste is waste that is a risk of causing an infection to someone who handles it. That is, anything that if you squeezed, blood or saliva would leak out, and obviously, all sharps. Lately, I’ve also seen a lot of people putting more things in the regulated waste container than need to go there.

Why would disposing of everything as if it were regulated waste be an issue? There are several reasons that it’s not a good idea.

“The biggest thing that I see is because people are always complaining about how much money it costs to get rid of their medical waste,” Dr Kane says. “It costs a lot of money to remove your medical waste. If your containers are filled with things that are not medical waste, you are paying more than necessary.”

“Part of that exposure control plan is a section called ‘Housekeeping’, and the housekeeping refers to regulated medical waste and the types of containers that need to be used,” Karen Daw, 'The OSHA Lady,' speaker and consultant, observes. “OSHA’s language says that it has to be closable, constructed to contain all the contents and prevent leakage, labeled appropriately, color coded, and then closed prior to removal to prevent spillage of the contents during handling. So, this is taken to mean something that is solid and rigid on the side, raised, and has a lid on it, and it’s going to be labeled with the biohazard symbol on it.”

But those containers aren’t just applicable to sharps.

“Your standard dental office sharps container meets that criteria,” she continues. “What I don’t think a lot of people think about, though for example, is what about the personal protective equipment (PPE) that’s laundered on site? Are we placing it into a standard hamper that we have at home that has holes in it, or are we placing that in a solid rigid container with the lid and then is color coded or labeled appropriately? So, I tell offices that a tall kitchen waste can is solid and rigid. It has a lid and a little foot pedal, so you don’t have to touch it. You slap a biohazard sticker on it, and it meets the definition of the appropriate OSHA container for potentially biohazardous PPE like those scrub jackets that might be considered biohazardous if it meets the criteria. And let’s not forget our instrument transport containers. I hear often that the instrument cassette is used to transport the contaminated sharps (instruments) and I have to explain those cassettes need to be placed into a container that meets the requirements.”

And while the rules apply across-the-board for every practice, each practice must have its own plan in place to dispose of regulated waste.

“With OSHA, under the Bloodborne Pathogen Standard, regulated waste disposal, as part of their exposure control plan, is specific and unique to that location,” Daw says. “So, if they bought one of those ready-made OSHA manuals and then just stuck it on a shelf somewhere – maybe they didn’t even bother to remove the shrink wrap – they’re technically in noncompliance, because the exposure control plan portion of their OSHA manual needs to be reviewed annually, or whenever there’s been an update, and the entire team needs to be familiar with it.”

Like the recycling example earlier, the practice’s waste has to be sorted and handled appropriately. That is, the paper trash from the front office is handled in a separate area than amalgam and chemicals from the clinical areas are handled. Manufacturers can explain how those items are disposed.

“You have to look at the safety data sheets (SDS),” Dr Kane says. “Every hazardous chemical in your office has an SDS. You should refer to that when trying to decide how to dispose of something. You have a separate amalgam waste container, and it’s not considered the same as regulated waste. So, if you had a tooth with amalgam in it, or you had a pile of amalgam, that’s not the same biohazard waste as your sharps container. That would go into the amalgam waste container.”

“When you introduce a chemical into the workplace, you must review the contents of the SDS with the team,” Daw adds. “And if offices were doing that, they would know that on the SDS, there is a section pertaining to hazardous waste disposal and its appropriate disposal. One of the common things that they ask me is. ‘How do I properly dispose of this fluoride varnish?’ Or, ‘How do I appropriately dispose of acid etch?’ I always have to refer them back to SDS. If the SDS didn’t state it, they should contact the manufacturer. The manufacturer would clarify it for them. If you’re ever concerned about how to appropriately dispose of something, go straight to the manufacturer.”

The Environmental Protection Agency (EPA) and OSHA have standards for handling dental waste. However, states, counties, and municipalities have their own rules and requirements to which practices must adhere.

“OSHA’s bloodborne pathogen standard gives us the federal standards for regulating medical waste, but we also have to look at your local township,” Daw observes. “For example, in the state of Ohio, small waste generators are allowed to dispose of regulated medical waste in the solid waste stream if they follow all the criteria. If you’re a small waste generator and you’re not generating more than 50 pounds of biological waste in any given month, they can technically put it in their trash. But, I do know of some offices that practice in specific cities and townships where that is not acceptable. So, for any business, it would behoove them to comply with not just what those federal and state rules are, but also what does their city say about disposing of certain types of waste so that they don’t get in trouble?”

Practices might not look forward to dealing with multiple levels of regulatory bodies, but not to worry: Although it is a requirement, it is not overly taxing.

“It’s not super cumbersome,” Dr Kane observes. “It’s not some crazy rule that you have to do all these things in order to be in compliance. These are common-sense safety rules. If you take care of your sharps and your medical waste correctly, then the risk is immensely reduced. If you’re putting sharps appropriately in sharps containers and transporting them safely into the big red biohazard box, the risk is reduced. All of the OSHA Regulations are there to protect you, and you should follow them to reduce your risk and your fellow team members.” 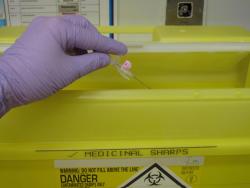 Sharps 101: What You Need to Know About Handling and Disposal 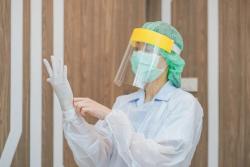