Battling the monsters in your practice

Learn how to defeat the bacteria, fungi, and viruses most likely to plague your patients.

Between the 1920s and 1950s, Universal Pictures releasedmanyhorror movies with itsUniversal Classic Monsters lineup. But while these monsters—including Dracula, The Wolf Man, and Frankenstein’s Monster—terrorized their victims, each had a unique way of being defeated.

Dental practices have their own monsters lurking in the form of bacteria, fungi, and viruses. Happily, staff do not need wooden stakes, silver bullets, or torch-wielding mobs to stave them off, just the standard infection control practices in which they are already well-versed.

“We all know the oral cavity harbors a large number of microorganisms, and that an infectious one can be transferred from the dental health care personnel (DHCP) to the patient, the patient to the DHCP, and patient to patient,” says Karen Daw, a speaker and consultant known as “The OSHA Lady.” “I don’t think many people think about the patient-to-patient aspect, but it’s a very real threat. I had an office call me last week asking if they needed to notify patients because they discovered that several instrument pouches in the trash had chemical indicators that did not change. The instruments were used on patients. But, certainly besides instruments and dental unit water lines, we know there’s the possibility of cross-contamination on surfaces, hands, and now a heightened awareness of exposure via aerosols. This is why annual [Occupational Safety and Health Administration (OSHA)] Bloodborne Pathogens mandatory infection control training is a must in many states.”

In response to the HIV/AIDS epidemic of the 1980s and 1990s, the Centers for Disease Control and Prevention (CDC) instituted Standard Precautions, a battery of practices used to protect health care settings from the transmission of infection.

“The dental profession has practiced Standard Precautions for [more than] 30 years as recommended by the CDC, because we deal with body fluids, saliva, blood, with some others that can be contaminated with blood, and even the aerosols that we create with all of our high speed equipment,” says Jackie Dorst, RDH, BS, Safe Practices infection prevention consultant and speaker. “We create aerosols, and Standard Precautions was created for those diseases that are transmitted by body fluids. That came down to the bloodborne pathogens of HIV, hepatitis B and hepatitis C, all transmitted in blood.”

While Standard Precautions was implemented in response to HIV/AIDS, it went on to protect against other infections, as well.

“With regards to OSHA and the annual requirement for Bloodborne Pathogens training, DHCP are well-educated on the big 3: HepB, HepC, and HIV,” Daw says. “But I think a few additional viruses are worth including, even if their mention is not synonymous with most safety and infection control presentations.

“For example, herpes simplex virus (HSV) is highly contagious,” Daw continues. “Most who’ve been in the dental field as long as I have will recall herpetic whitlow prior to the requirement to wear gloves. For those who are just now entering the dental field, I think they’ve heard the stories of how we used to practice ‘wet-finger’ dentistry, but still are in a state of shock when they think of a time when we used to put our hands in people’s mouths without any personal protective equipment (PPE), [such as] gloves.”

“We have a variety of diseases that are both bacteria and viruses that can be transmitted within those heavy, wet droplets, and yet they are invisible to us,” Dorst adds. “One of those viruses is the measles virus. Let's say a patient came in [who] was infected with measles and sat down in the dental office reception room, waiting for their appointment for just 10 or 15 minutes, and the staff didn't know that that person was infected with measles. The measles virus could remain suspended in the air in that reception room for up to 2 hours.”

Standard Precautions are effective, but they’re not the only tool to help ward off infection.

“When I [give a presentation] on OSHA or Infection Control, I always include a slide on CDC-recommended immunizations for health care workers,” Daw says. “Included on the list is the varicella-zoster vaccine, which protects [individuals] from chickenpox….Highly

contagious, [the virus] is transmitted via direct contact with a blister, and airborne transmission is possible.”

Viruses aren’t the only monsters lurking about the dental practice. Deadly bacteria also can develop and thrive if infection control is not managed.

“Most bacteria, while not typically directly implicated in specific disease, could pose a problem in the dental setting without appropriate infection control and safety systems in place,” Daw says. “And there’s also concern around MDRO—or multidrug resistant organisms—that have proven problematic with regard to control via antibiotics. When I first started in the industry, it was not uncommon for the dentist to prescribe me a Z-Pak [azithromycin, an antibiotic] at the first sign of the sniffles. Now, antibiotics are only offered sparingly and after a thorough assessment. This is based in part to MDRO [such as] methicillin-resistant Staphylococcus aureus [MRSA], which has been found in the air-water syringe, dental impression guns, gypsum casts, and some surfaces within a dental setting.

“One of the most well-known bacteria that is included in most infection control talks is Mycobacterium tuberculosis, or TB for short,” she continues. “And to top it off, there are drug-resistant strains [that] have made treating and curing particularly problematic. The offices that work with me have been receiving training on identifying signs of TB since our first meeting. Why? Because the patient coming in the front door hacking and sneezing all over the waiting area might not have just a cold or seasonal allergy. Some respiratory symptoms for TB are similar to what is passed around during flu season. In addition, when looking at TB symptoms, a discerning eye will notice that there is overlap with [coronavirus disease 2019 (COVID-19)] symptoms. Which is why, even pre–COVID-19, it was important for the office to be performing some type of screening when patients arrive, even if visual, to prevent sick patients from being seen. The goal is to prevent spread of any bacterial or viral infection among the team, and to encourage patients to practice self-care and to rest to heal. TB, like COVID-19, is spread through droplet nuclei when someone coughs, sneezes, or just speaks. It, too, can remain airborne for several hours. Part of the practice’s annual TB assessment includes [asking], ‘What is the likelihood for occupational exposure?’ If we’re not actively seeing TB patients based on rescheduling those with respiratory symptoms, then the likelihood of being exposed at work falls to almost zero.”

The fear of transmitting these diseases is even more concerning with winter on its way.

“We're in smaller, closed rooms and it’s cold outside,” Dorst says. “We have our heating on, and the air is drier ,and there is a risk if you didn't have a lot of fresh air coming into that room, then possibly the [COVID-19] virus could be transmitted.”

Dental practice monsters aren’t limited to land or air. Just like the Creature from the Black Lagoon, they also can conceal themselves in water.

“Possibly lurking in our dental unit water lines (DUWL) is Pseudomonas aeruginosa,” Daw says. “Let’s pause and think about this for a moment. All we’ve heard the past year is ‘aerosols, aerosols, aerosols.’ Of course, we know the recommendations state to avoid aerosol-generating procedures (AGP), except when absolutely necessary. And while there are no current studies that show coronavirus survives in DUWL, we still must manage patient expectations. Our patients are hearing the same thing via a 24-hour news cycle. So when they arrive for the appointment, and we must produce aerosols, what are they thinking?”

“We've identified a lot of bacteria that can grow in those worlds,” Dorst says. “If they're not properly cleaned and maintained, the water can stagnate inside the small tubing. And there are several types of bacteria that have been identified coming out of the water line, such as Legionella bacteria. And then we've also identified some toxins that can be transmitted or be produced by bacteria in the lines. There’ve been 2 incidences where patients have been infected by Mycobacterium abscessus that was in the dental unit water line and caused severe illnesses—both incidences were in pediatric dental offices, and they required the patients to be hospitalized.”

Like so many other methods used to defeat these monsters, water line treatment is a standard, established procedure.

“We need to pay attention to both cleaning our water lines by some sort of shock method, and then treating the water lines with an antimicrobial to prevent them from building up more of the biofilm,” Dorst says. “And then the final step is testing to validate that, ‘Yes, the treatment that we're giving to our water lines is effectively working.’” 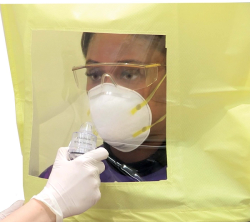 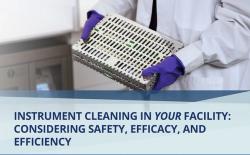