Well over 80% of endodontic therapy in the United States is performed by general dentists. That is significant because US endodontists are quite busy. If general practitioners were not able to bear the load, patients would be lined up and in pain for months. Fortunately, that is not the case. Endo remains an important, predictable part of our clinical decision-making process.

The concept behind endodontics is simple, embracing one of the most common tenets of health care. If the body has infected tissue it cannot remove on its own, a doctor should remove that tissue and any related infection to allow the body to properly heal. It is no different than any other surgical excision process. Following that line of thought, the difficulty of endodontics is that we do not have direct access to the affected area. That means we are forced to work in tiny spaces, removing the nexus of infection while basically “going by feel.”

The most important part of endo is removing all necrotic tissue and bacteria from the canal system. When viewed microscopically, the canals are full of curves, nooks, crannies, and anastomoses that make effective cleaning extremely difficult. Most canals also do not have a perfectly round shape. That means we are attempting to use highly machined instruments that are perfectly round in a field that is anything but round. All those areas are “outside the circle” and not touched by round files…unless you make those round files with a larger diameter.

That concept has been used for almost as long as rotary instrumentation for endodontics has existed. Logically, if you take a drill and make a quarter-inch hole in a two-by-four and then ream that hole with a half-inch–diameter drill bit, all the sides of that existing quarter-inch hole will be removed. That is essentially what large taper rotary files do inside the canal.

Although that logic sounds good in theory, in practice large taper files remove a great deal of tooth structure, especially in the coronal third of the canal. Each individual tooth is a phenomenal example of engineering, and teeth are built the way they are through millions of years of evolution. Teeth exist in the form they do because that is the best engineering nature has come up with. One of the biggest challenges practitioners face is trying to rebuild teeth to be as strong or stronger than they were before they were affected by disease.

The idea of enlarging the canals to achieve access and to remove all the pathogens is noble. However, when you think of taking a canal that has trouble accepting a #6 .02 taper file all the way to the apex and then instrumenting the canal to a much larger diameter, that is a lot of root structure to remove. My grandfather used to say, “Son, never sacrifice the future upon the altar of the immediate,” and he was right. By greatly enlarging canals, we do make it easier to access and to clean. However, if that tooth suffers a catastrophic fracture and requires extraction 2 years later, was all the instrumentation in the patient’s best interest? The roots have a finite diameter and if we decrease the wall thickness by increasing the instrumentation diameter, we weaken things considerably.

For the past few years, I have been following the progress of endo instrumentation. Several years ago, dentistry began to focus (and rightfully so) on the concept of “minimally invasive” procedures. Why remove more tooth structure than necessary? Why not “bank” more tooth structure for later? Yet why have we moved more toward minimally invasive procedures while doing just the opposite in endodontics?

That is one reason I am excited about the new line of rotary files from SS White. The system is called ExactTaperHDC. I have been test-driving the system for a while now and am impressed.

Another advantage is the one I am most excited about. SS White designed this system to effectively instrument canals while performing the task in a minimally invasive manner. The maximum file diameter is .08 taper and some canals do not even require that. This means that valuable tooth structure is preserved and strength retained. This is intrinsic to helping ensure the long-term viability of the tooth.

I have also been very impressed with the flexibility of these files. Nickel titanium really shows its abilities when instrumenting curved canals, but some files perform better than others. These files have exceptional flexibility, which makes navigating with them easy. There is also the matter of how well they clean a canal. The ExactTaperHDC files are not only incredibly flexible, but they also possess the ability to thoroughly instrument the canal system. They are efficient but not too aggressive, and this goes with the concept of being minimally invasive as well.

Obturation has also been greatly simplified. The gutta percha points are designed to precisely fit the files. This means that when a finishing file goes to length easily you can proceed knowing that the gutta percha point will as well. The precision of this system means that everything matches perfectly, giving the operator a “hand in glove” experience during obturation.

The company also created a bioceramic sealer to go with the system. Gone are the days of a sealer irritating periapical tissues. This sealer is based on Mineral trioxide aggregate (MTA), so it is incredibly kind to the body. It maintains a pH optimal to providing an antibacterial effect while encouraging new tissue formation and diseased tissue recovery. It is highly radiopaque and has a consistency that makes it easy to dispense and use.

The ExactTaperHDC system from SS White is an endo system with much to offer. If you are looking for a system that is easy to use, minimally invasive, and offers numerous other advantages, I advise you to take a close look. I am confident that you will be as impressed with it as I am. 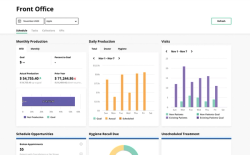 Test Drive: Software Simplifies the Business Side of Dentistry