Curing is an interesting subject. In some ways, curing has changed a lot during its history…and in some ways it has changed very little. Let me give you an example of what I mean.

In the early days of light curing, we used actual light bulbs to produce the proper wavelength of light needed for polymerization. These were replaced by “high-speed curing lights” that used powerful halogen bulbs to create stronger beams with greater curing potential. However, even though they were more powerful, halogen bulbs still required long curing times. Back then 40 to 60 seconds per increment was not unheard of. That’s because those light bulbs put out all kinds of different wavelengths of light, and it took time for enough of them to cause photopolymerization. It was akin to throwing spaghetti against the wall and hoping enough would stick.

The industry’s holy grail became the sub–30-second cure. Companies tried tips that better focused the energy (called Turbo Tips), and there was even a type of light known as a plasma arc curing (PAC) light that could give a fast cure, but they were expensive and bulky.

Then around 2000 or 2001, the LED curing light took the market by storm. Suddenly dental curing lights were powerful and small. Within 5 years, curing lights using bulbs were practically off the market, replaced by smaller and more reliable LED systems that provided amazing results in adhesive dentistry.

Here’s a little bit of dental trivia you probably don’t know: Every time you use an LED curing light, you should thank its inventor, Densen Cao, PhD. He’s the man who invented this amazing device. Now, why would I mention Dr Cao in a discussion of a new curing light? It’s because he is also the inventor of the handheld curing laser.

And who better to stand the world of curing lights on its collective head than the man who has already done it once? Welcome to another game-changing piece of hardware from the fertile mind of Densen Cao.

Over the past 20 years, we have seen tremendous strides made in our curing lights. Intensity has increased and power needs have decreased. Today’s lights can cure an increment in 5 seconds and are cordless, going days without needing a charge. So where do we go from here?

The next generational jump in curing is the Monet curing laser. There has never before been a curing laser that fits in the palm of your hand. The Monet takes over with properties only a laser can bring, the most important being collimation.

With any light other than a laser, photons spread out in all directions as they leave the source. However, with a laser they all move in a tight beam that forms a column of photons (hence the term collimation). This means that every photon produced strikes the target. Why is this important? It gives the laser more power and greater depth of cure. Simply put, there is very little waste of curing energy from a laser.

There is also a terrific advantage to laser-cured restorations. With “normal” curing lights it is imperative to be as close to the restoration as possible. If an LED light moves even 2 or 3 mm away from the restoration, the amount of curing power that the light delivers decreases exponentially. Lasers, due to their collimation, can properly cure a composite even if it is several millimeters from the target. This means you get a properly cured restoration every time.

I’ve spent a lot of time in dental offices in my career, and there is one mistake I’ve noticed time and again. An assistant puts the curing light close to the target and then looks away, in an effort to protect their eyes. However, the simple act of looking away often means the light moves away from the target and the LED beam intensity drops. The material cures on the surface but doesn’t receive sufficient depth of cure. The result is what I call “candy composites,” which are “crunchy on the outside and chewy on the inside.” This creates all kinds of problems later, as we all know. That same situation would never happen with the Monet, as the beam intensity is sufficient for a properly cured composite even if the device isn’t next to the target.

The collimation also means better depth of cure. When using a laser, every photon that is produced hits the target. This creates an incredibly strong restoration because the strength of the beam penetrates deep into the material. AMD Lasers’ in-house measurements have found a depth of cure of up to 8 mm. Think about that for a moment. Now, for argument’s sake, let’s say that number is actually 6 mm. Given that over 80% of Class II restorations are 5 mm or less, that means the Monet has just changed 80% of your restorations to bulk fill even if the material is not designed to be bulk fill. And that means your efficiency just took a really big boost.

It has always been popular for a curing device to have a variety of settings for intensity and time. The Monet completely changes that concept. It has 1 button that produces one 3-second curing cycle. That’s all there is because that’s all you need.

The curing head can rotate 360º so the user can position it with ease. It also comes with 2 interchangeable batteries to ensure the Monet is always ready. The device kit includes laser protective eyeglasses that should always be worn when using the device. Lasers have a strong beam, and eye protection is a must when using any type of laser.

If you are in the market for a curing light, you owe it to your patients to check out the Monet. It will take your curing to a whole new level! 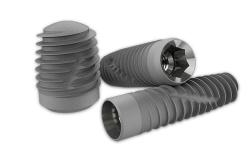 Why ZimVie Is What’s Next in Implants 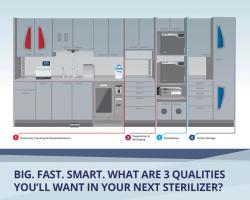 Free eBook – Big. Fast. Smart. What Are 3 Qualities You’ll Want in Your Next Sterilizer?
Advertisement
Advertisement